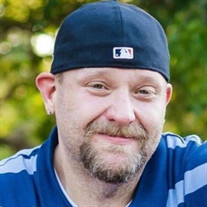 Aaron Marc Taylor, age 46, passed away after a brief illness on Wednesday, February 2, 2022. He was born to Lynda Clancy & Michael Taylor on November 4, 1975, in Big Spring, Texas. Aaron married his love, Stephanie Taylor, on August 27, 2005, in Odessa. Aaron worked as a machinist but more important than any job were his family and friends. He loved his people and had a heart the size of Texas. He liked music of all kinds, was a huge fan of the Texas longhorns and enjoyed joking around and making people laugh. Aaron wore his heart on his sleeve and was compassionate and kind. He listened well and was always willing to lend a helping hand. He was a truly beloved husband, father, son, brother, uncle, and friend and will be missed by so many who had the privilege of loving and being loved by him. Aaron is survived by his wife Stephanie and two sons, Jayden Taylor, and Levi Wiggins; father Michael Taylor and stepmother Denise Taylor; brother Jason Taylor and sister-in-law Keri; sister Megan Petri and brother-in-law Joel; brother Steven Berry; nephews Jerek Martinez, Jase Taylor, Sheldon Vaughn; niece Ashley Cadena and husband Saul; nieces LeeAnn Vaugh and Amara Ford. He was preceded in death by his mother Lynda Clancy and stepfather Richard Clancy; grandparents Perry and Joey Anderson; grandmother Peggy Anderson; grandmother Wilma Dobbs; and niece Rylee Taylor. A celebration of Aaron's life will be held at 2:00pm on Thursday, February 24, 2022, in the chapel at Crossroads Fellowship, 6901 E. Hwy. 191, Odessa, Texas. In lieu of flowers, the family requests donations be made to the Live Like Rylee Foundation which honors the memory of Aaron’s niece Rylee. You may make donations by going to www.livelikerylee.org and noting “In Memory of Aaron Taylor.” Please take a moment and share a kind thought or memory with Aaron’s family at www.andersonbethany.com Aaron’s tribute was written in his honor by his family.

The family of Aaron Marc Taylor created this Life Tributes page to make it easy to share your memories.

Aaron Marc Taylor, age 46, passed away after a brief illness...

Send flowers to the Taylor family.