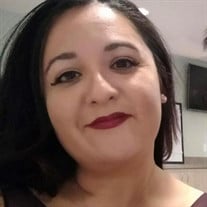 Adelaida ‘Deli’ Olivas-Urias, 44, of Hagerman, passed away on August 23rd, 2021, in Albuquerque, NM. Please take a moment and share a kind thought or memory with Adelaida’s family at www.andersonbethany.com. Viewing is on Wednesday, September 1st, 2021, at Anderson-Bethany Funeral Home from 3:00 PM to 5:00 PM, with a rosary following until 6:00 PM. On Thursday, September 2nd, 2021, funeral services will be at Church on the Move, starting at 10:30 AM, with the burial afterward in Hagerman cemetery. Adelaida was better known by her nickname ‘Deli’, and she often preferred to introduce herself as such. Deli graduated from Hagerman High School in May 1995. She remained a true Hagerman Bobcat alumni and fan when her children started to compete athletically and academically. She rarely missed a game or competition and often rooted for all members of the team. Deli is preceded in death by her grandmother Paula Olivas, great-grandmother Tomasa Ramirez, and Father Robert Bundy Sr. Deli is survived by her daughter and four sons: Aaliyah Garcia and boyfriend Mario Moreno Jr., Sebastian Garcia, his girlfriend Karen Sanchez, and son Jaylon Garcia, Elijah Garcia, Jerry ‘Zeke’ Garcia Jr., and Matthew Garcia. Deli is also survived by her mother and biological father Diana Olivas and Armando Becerra and brother and sisters: Robert Bundy Jr., Valentine Diaz, and youngest sister Jessica Valadez. Pallbearers will be Sebastian, Elijah, Zeke, and Matthew Garcia, Valdemar Diaz, Valdemar Diaz Jr., Mario Moreno Jr., and Andrew Valadez. Honorary Pallbearers will be Robert Bundy Jr., Michael Urias, Jesus Olivas, Juan Garcia, Kianna Valadez, Kamron Barreras, Ayden Valadez, Zayvah Diaz, Makaylah Diaz, and Valentine Diaz. Deli’s family would like to give their sincerest gratitude to the Hagerman/Dexter/Roswell community, Church on the Move, and all of her extended family and friends who have given their love, prayers, and support through this difficult time. Adelaida’s tribute was written in her honor by her family.

Adelaida &#8216;Deli&#8217; Olivas-Urias, 44, of Hagerman, passed away on August 23rd, 2021, in Albuquerque, NM. Please take a moment and share a kind thought or memory with Adelaida&#8217;s family at www.andersonbethany.com. Viewing is on Wednesday,... View Obituary & Service Information

The family of Adelaida "Deli" Olivas-Urias created this Life Tributes page to make it easy to share your memories.

Adelaida ‘Deli’ Olivas-Urias, 44, of Hagerman, passed away on...

Send flowers to the Olivas-Urias family.