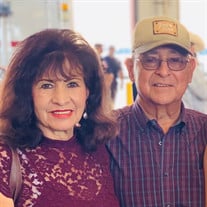 Albert Mora, Sr. and Elvira (Vera) Mora Albert Renteria Mora, Sr., 75 of Hachita, NM was called home on Tuesday, September 14, 2021, in Roswell, NM. He was born in Hachita, NM on April 8, 1946, to Jose Mora and Dolores Renteria Mora, who preceded him in death. He attended Animas High School in Animas, NM. In 1965, he was drafted into the United States Army. He was deployed to Korea where he served both passionately and honorably for two years and completed his service as a Sergeant. Prior to retirement he worked for the Luna County Sheriff’s Department. Elvira (Vera) Ramirez Mora, 72 of Hachita, NM was called home on Saturday, October 9, 2021, in Las Cruces, NM. She was born in Ft. Hancock, TX on October 13, 1948, to Tranquilino and Margarita Sanchez Ramirez who preceded her in death. She attended Animas High School in Animas, NM. She retired as a U.S. Postmaster in Hachita, NM. Albert and Vera met, fell in love and began their life together in 1968. They were married in Lordsburg, NM on June 25, 1968. From their happy union they had two wonderful sons, Albert Renteria Mora, Jr. (Stacy) of Roswell, NM and Thomas James Mora (Ann Marie) of Las Cruces, NM. Albert and Vera also had four grandchildren who were the light of their lives: Sierra Huggins (Jerid) of Roswell, NM, Alexa Mora of Las Cruces, NM, Shane Mora of Las Cruces, NM and Aidan Mora of Roswell, NM. Albert and Vera were members of the First Baptist Church in Deming, NM, and their love for Jesus was evident in their daily walk. Albert and Vera both enjoyed being outdoors. They loved hiking, camping and trips with their grandchildren to the Chiricahua Mountains. You would often see Vera on daily walks around the town of Hachita with their beloved “Poncho”. Poncho was their family dog whom they loved dearly. Preceding Albert in death are his brothers: Cruz Mora, Bernardino Mora and David Mora; his sisters: Paula Castillo, Lupe Terrazas and Virginia Lopez. Preceding Vera in death are her brothers: Eusebio Sanchez, Raul Ramirez, Roberto Ramirez and Jose Luis Ramirez; sisters, Hortencia Calzada, Eva Ramirez, Cuca Ramirez, Maria Ramirez. Albert is survived by his brothers Robert Mora, Joe Mora, Johnny Mora and Gilbert Mora; sister, Ellen Dominguez. Vera is survived by her brothers Vincente Ramirez, Tranquilino Ramirez, Jr., and David Ramirez; sisters, Olga Lopez, Lupe Granados, Mary Rogers, Nancy Wong and Olivia McDonald. A Memorial Service for Albert and Vera will be held at the First Baptist Church in Deming, NM on Saturday, November 13, 2021, at 11:00 a.m. The family will greet friends immediately following the service at the Rio Mimbres Country Club in Deming, NM. Vera’s favorite quote: “Do not go where the path may lead, go instead where there is no path and leave a trail.” - Ralph Waldo Emerson Please take a moment and share a kind thought or memory with the Mora family at www.andersonbethany.com. Mr. and Mrs. Mora’s tribute was beautifully written in their honor by their family.

The family of Albert and Elvira (Vera) Mora created this Life Tributes page to make it easy to share your memories.

Send flowers to the Mora family.