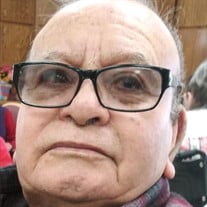 Alberto Murillo, 81, of Roswell, New Mexico, passed away on December 28, 2020. Visitation will begin at 8 a.m. Friday, January 8, 2021 at Anderson Bethany Funeral Home. Funeral services will be held at 10 a.m. Saturday, January 9, 2021 at Anderson Bethany Funeral Home with Pastor Sergio Tirado of Church on the Move, officiating. Burial will follow at South Park Cemetery. Arrangements are by Anderson Bethany Funeral Home. Alberto was born in Villa Aldama, Chihuahua to Josefina Murillo and Sotero Murillo on December 17, 1939. His hobbies included learning karate of which he had earned a black belt. He also had a love for playing his accordion which he learned to play on his own and working on cars. There was never an idle moment for him. Alberto is preceded in death by his son Alfredo Murillo, two sisters Hermelinda Estrada and Teresa Baeza. His sister-in-law Guadalupe Murillo and both parents. Alberto is survived by his daughters Oralia Torres her husband Anthony, Silvia Cardona and her husband Ramon, Yesenia Murillo and Angela Murillo and her husband Chris. His sons Danny Murillo and his wife Miguelina, Raymond Espinoza and one daughter-in-law Maria Dolores Murillo. He is also survived by his brothers Marcos Murillo and his wife Maria, Ruben Murillo and his wife Margarita, Enrique Murillo, Rosalio Murillo and his wife Rosa and one brother-in-law Francisco Estrada. One sister Ofelia Murillo and her husband Alejandro and numerous grandchildren, great grandchildren, nieces and nephews. Pallbearers will be Alex Cardona, Christopher Martinez Jr., Greg Jauregui, Alfredo Murillo Jr., Aaron Murillo, Joshua Murillo, Orlidia Garcia, and Danny Murillo. Honorary pallbearers are all grandchildren. The family would like to thank Eastern New Mexico Medical Center Covid staff, the staff at Mission Arch and a special thanks to his health coordinator Yolanda Kimbrell. In lieu of flowers or donations, we ask that you take a moment to hug your loved ones. Time waits for no one. Please take a moment and share a kind thought or memory with Alberto’s family at www.andersonbethany.com. Alberto’s tribute was written in his honor by his family.

The family of Alberto Murillo created this Life Tributes page to make it easy to share your memories.

Alberto Murillo, 81, of Roswell, New Mexico, passed away on December...

Send flowers to the Murillo family.