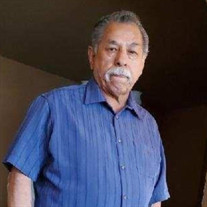 ALEJANDRO OGAS JR, 67, passed away on Thursday, January 7, 2021, in Roswell, New Mexico. Please take a moment and share a kind thought or memory with Alejandro’s family at www.andersonbethany.com. SERVICES: There will be a Viewing for Alejandro at Anderson Bethany Funeral Home on Monday, January 25, 2021, from 8:00 AM to 8:00 PM to 6:00 PM, followed by a Rosary at 6:00 PM. A Mass will be held at St. John the Baptist Catholic Church on Tuesday, January 26, 2021, at 10:00 AM. Interment will follow at General Douglas L. McBride Veterans Cemetery. On May 16, 1953, Alejandro was born to Alejandro Ogas Sr. and Cecilia B. Ogas in Roswell, New Mexico. He proudly enlisted and served his country in the U.S. Army, and he was honorably discharged after completing his term. Prior to retirement, Alejandro worked at Lovelace Regional Hospital as a supervisor cook. He loved to go cruising in his chick magnet pickup, listening to oldies, and going to car shows. He was a New England Patriot fan. My Tio Alex and his stepgrandson, Mundito, would go on adventures, as they would call it, with Mundito riding his ATV along his side. They would go down the street and alleyways so that Mundito and his Papo could go looking for evidence, and they were the pair of “Crime Scene Investigators.” Although my Tio didn’t have any biological children of his own. He was given the gift, joy, and love to truly be blessed to be called Papo thru the eyes of Raymundo Sanchez Jr, and for that, we are truly grateful because it put a smile and contentment and worth on my Tio’s face every time we saw them together. My Tio Alex was taken much too soon from his family and friends, and he will be greatly missed! We Love you, Tio Alex. SURVIVORS: Alejandro is survived by his life partner, Josephine Jerri Samario; stepchildren: Michael Luevano and spouse Jolene and Nadine Munoz; stepgrandson, Reymundo Sanchez Jr, sister, Maryilda Christine Ogas; uncles: Joe Fuentes and Domingo Fuentes; nieces: Roberta Rodriguez and Joe Chavez, Elisa and spouse Ernesto Sierra, Theresa Adame; numerous nieces and nephews, great-nieces and nephews, and great-great-nieces and nephews; as well as his precious German shepherd, Ringo. PRECEDED: Alejandro is preceded in death by his parents, Alejandro Ogas Sr. and Cecilia B. Ogas; grandparents: Tomas Ogas and Vital Najar, Fernando Benavidez and Sofia Perez; siblings: Fernando Ogas, Andrea Ogas, and Sofia Ogas; and nieces and nephews: Louisa Ramirez, Russie Ramirez, Fernando Ogas Jr “Boy.” PALLBEARERS: Those honored to serve as Pallbearers are Lorenzo Najar, Horacio Gutierrez, Mariano Morones, Raymundo Sanchez Sr, Robert Fuentes, and Gerardo Garcia Sr. HONORARY PALLBEARERS: Those blessed to serve as Honorary Pallbearers are Roberta Rodriguez, Elisa Sierra, Theresa Adame, and Valeria Sanchez.

ALEJANDRO OGAS JR, 67, passed away on Thursday, January 7, 2021, in Roswell, New Mexico. Please take a moment and share a kind thought or memory with Alejandro&#8217;s family at www.andersonbethany.com. SERVICES: There will be a Viewing for... View Obituary & Service Information

The family of Alejandro Ogas Jr. created this Life Tributes page to make it easy to share your memories.

Send flowers to the Ogas family.