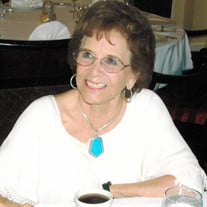 Alicia Adauto, 92, of El Paso, Texas, passed away on Friday, December 10, 2021, in Roswell, New Mexico. Please take a moment and share a kind thought or memory with Alicia’s family at www.andersonbethany.com. Funeral Services will be announced at a later date and held at Assumptions of The Blessed Virgin Mary Church at 2808 North Kentucky, Roswell, N.M. On August 29, 1929, Alicia was born to Manuel Adauto and Maria Camarillo Adauto in El Paso, Texas. Alicia lived in El Paso, Texas, and moved the family to Chesterfield, Missouri for twenty years and lived there for fifteen years. After graduating from Bowie High School in 1948, she attended Texas Ester College for two years. Alicia was tireless and dedicated to helping people in need. She volunteered for RSVP (Retired Senior Volunteer Program). Alicia volunteered for Casa De Peregrinos and was part of the CCC (Christ Child Circle), which helped unwed mothers, abused children, and other causes. She belonged to the Queen of Peace in El Paso. Alicia worked for the US Government at the Department of Defense in Finance for thirty-four years, where Alicia started as a clerk typist and retired as an accountant. Alicia was an intern for the government, where she traveled extensively to learn new techniques to help her along in her job. Those left to cherish memories of Alicia are her sons: Leo Robert Hernandez, Andrew K. Hernandez; and three sisters: Maida, Toni, and Billie. Alicia is preceded in death by her mother and father; her first husband, Andrew G. Hernandez; great-aunt, Lucilla Camarillo; older sister, Anita Johnson; and her two brothers: Manuel Adauto Jr. and Dr. Inez Adauto. Please take a moment and share a kind thought or memory with Alicia’s family at www.andersonbethany.com. Alicia’s tribute was written in her honor by her family.

Alicia Adauto, 92, of El Paso, Texas, passed away on Friday, December 10, 2021, in Roswell, New Mexico. Please take a moment and share a kind thought or memory with Alicia&#8217;s family at www.andersonbethany.com. Funeral Services will be... View Obituary & Service Information

The family of Alicia Adauto created this Life Tributes page to make it easy to share your memories.

Send flowers to the Adauto family.