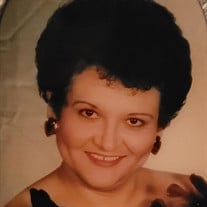 A loving wife, mother, and grandmother, ANA J. PRUDENCIO, 65, passed away on Tuesday, January 23, 2021, in Roswell, New Mexico. Please take a moment and share a kind thought or memory with Ana’s family at www.andersonbethany.com. SERVICES: There will be a Viewing for Ana on Thursday, February 4, 2021, at Anderson Bethany Funeral Home from 10:00 AM to 6:00 PM, followed by a Rosary at 6:00 PM. A Rosary will be held at Assumption Catholic Church on Friday, February 5, 2021, at 2:30 PM, followed by a Memorial Mass at 3:00 PM. On April 17, 1955, Ana was born to Julian and Rita Aguilar. She graduated from Lake Arthur High School. Ana was the beloved wife of Claudio Prudencio, whom she married on July 13, 1985, in Lake Arthur, New Mexico. She worked as a teacher for the Roswell schools, Artesia schools and retired from the Dexter schools in 2017. Ana was an inspiration to many of her students. She was a devoted member of Assumption Catholic Church. She enjoyed watching TV, cooking, and reading, especially to her grandchildren. Ana loved being with her family, it was her favorite pastime. She will be missed by her family and friends. SURVIVORS: Those left to carry on Ana’s legacy are her beloved husband, Claudio Prudencio; children: Veronica Prudencio (Chris Jarm) and Alyssa Prudencio; grandchildren: Christopher Jarm, Annalysa Prudencio, and Logan Jarm; mother, Rita Aguilar; siblings: Jose Aguilar and wife Rosemary, Julian Aguilar and wife Elsa, Socorro Aguilar and husband Roberto, and Tony Aguilar and wife Tina; sister-in-law, Oralia Aguilar; loving pets: Canela and Layla Prudencio; as well as numerous nieces, nephews, aunts, and uncles. PRECEDED: Ana was preceded in death by her father, Julian Aguilar; grandparents: Andres Baeza and Cruz Villanueva Baeza, Loginos Aguilar, and Magdalena Jaquez Aguilar; and her brother, Jaime Aguilar. PALLBEARERS: Those honored to serve as Pallbearers are Chris Jarm, Christopher Jarm, Jose Aguilar, Julian Aguilar, Tony Aguilar, Jaime Aguilar, and Daniel Aguilar. Ana’s family would like to give a special “Thank You” to their family and friends who have prayed and helped with necessities and meals.

The family of Ana J. Prudencio created this Life Tributes page to make it easy to share your memories.

Send flowers to the Prudencio family.