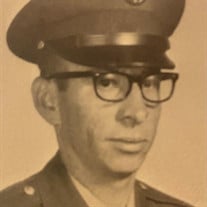 Andres F. Lopez, 79, passed away on Tuesday, April 26, 2022, in the town of Dexter. Please take a moment and share a kind thought or memory with the Lopez family at www.andersonbethany.com. Funeral Services will be held at General Douglas L. McBride Roswell Veterans Cemetery (South Park Cemetery) on Monday, May 9, 2022, at 11:00 AM, officiated by St. Peter’s Church with Interment to follow. On September 6, 1942, Andres was born to Victoriano Marrujo Lopez & Josefina Brady Lopez in Albuquerque, New Mexico. He was raised and attended Carrizozo School, graduating from Carrizozo High School in 1960. Andres worked at the Carrizozo Newspaper until moving to Roswell in 1962 to work for the Roswell Daily Record. He was drafted into the United States Army during the Vietnam War on April 28th, 1965. During his time in the Army, he was awarded GCMDL, NDSM, and SPS (M-14 Rifle). Andres completed a 10-week MTC Course, became a Medical Corpsman, and was then honorably discharged from the Army on April 27th, 1967. Andres was very proud that the Lopez men (5 brothers) from Carrizozo, all served their counrty in the Army, Navy, and United States Air Force. After the Army, Andres married Rafaela Rodriguez on December 18, 1971, in Roswell, NM. He was involved in helping coach Dexter Little League, Dexter PAL boxing, and was a Dexter Volunteer Firefighter. Andres also served his community as a City Councilor for the Town of Dexter from 1998 – 2012. Prior to retirement, Andres worked as a printer for the Roswell Daily Record & Hagerman Newspaper. He then began working for the United States Postal Service in 1983 and retired in September of 2003. After retiring from the USPS, he worked at FLETC as a Security Guard until December of 2009. Andres was a hard worker and a Friend’s Friend, he always went out of his way to help people. His favorite quote was “It is what it is” and “Soy quien soy, y no voy a cambiar pa’ nadie”. Andres will be missed by his family and friends. Survivors include his wife, Rafaela R. Lopez; children Josie Enriquez, Jaime A. Lopez and wife Marina, and Deborah (Debbie) Lopez; grandchildren Hannah Brewer, Isaiah White, Machaella Lopez, Esai Lopez, Karyme Lopez, Jose Lopez, Jesus Egnew, Stephanie Noriega, and Cruz Noriega; many great-grandchildren; Siblings Ray Lopez, Bill Lopez, Rosa Sandoval, and Richard Lopez. Andres was preceded in death by his father; mother; a brother; two sisters; one grandchild; and one great-grandchild. The Lopez Family wishes to extend sincere thanks to VA Clinic in Artesia, Entire Dexter Volunteer Fire & EMS services (Chief Powell), Dexter Police Department (Chief Portio), and any individuals that stopped to talk to him when he would sit outside smoking his cigarettes. Andres’ tribute was written in his honor by his family.

Andres F. Lopez, 79, passed away on Tuesday, April 26, 2022, in the town of Dexter. Please take a moment and share a kind thought or memory with the Lopez family at www.andersonbethany.com. Funeral Services will be held at General Douglas... View Obituary & Service Information

The family of Andres Lopez created this Life Tributes page to make it easy to share your memories.

Send flowers to the Lopez family.