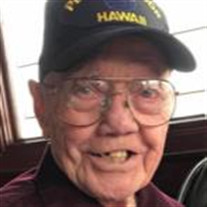 Andrew Deshotel Jr, a devoted husband, beloved father, and wonderful friend to many, was called home to the Lord on Saturday, December 19, 2020, at home with his family by his side. Retired Chief and Pearl Harbor survivor, Andrew Deshotel recently celebrated his 99th birthday. He has been a Roswell, N.M. resident for the last 36 years. On September 25, 1921, Andrew was born to Andrew Deshotel and Elvina Carrier in Palmetto, Louisiana. He attended Morrow High School and left with an 8th-grade education, then eventually went to New Orleans and entered Electronic school. Andrew then received degrees in electrical and electronic engineering. He wanted to join the military, so he faked a birth certificate, joined the US Army in 1939, bought his way out of the Army and joined the Navy. Andrew sounded the general alarm for WW11. After Pearl, he served on his ship, USS Conyngham, through fourteen major Pacific battles. Andrew served twenty years on active duty, then ten years on the reserves. After twenty years in the Navy of active duty as a Chief Petty Officer, he retired and went to work for FAA, building radio, radar and microwave and repeater towers across the country. Andrew’s hobbies were cooking, fishing, and hunting. He was a lifetime member of the Lions and Elks Clubs. Blessed with a large and loving family, Andrew and Edna were married for thirty-four years. Between the two, they had three children: Guy and Kathy Deshotel of Dallas TX, Tami Kennard of Roswell NM, and Allen Jones of Roswell NM; eleven grandchildren: Ryan, Tawny, Robbie, Joshua, Zachary, Ticey, Gavan, Logan, Brandon, Amanda, and Timothy; several great-grandchildren, and many nieces and nephews. Andrew had two brothers and three sisters who preceded him in death. A Graveside Service Honoring Andrew will be held at the General Douglas L. McBride Veterans Cemetery in South Park, 11:00 AM, Saturday, January 2, 2021. Arrangements have been entrusted to Anderson Bethany Funeral Home and Crematory. For any information, please contact the funeral home at 575-622-5888. Please take a moment and share a kind thought or memory with Andrew’s family at www.andersonbethany.com.

Andrew Deshotel Jr, a devoted husband, beloved father, and wonderful friend to many, was called home to the Lord on Saturday, December 19, 2020, at home with his family by his side. Retired Chief and Pearl Harbor survivor, Andrew Deshotel... View Obituary & Service Information

The family of Andrew Deshotel Jr. created this Life Tributes page to make it easy to share your memories.

Send flowers to the Deshotel family.