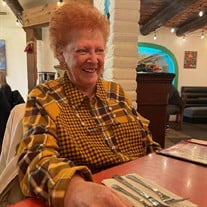 I have fought the good fight; I have finished the course, I have kept the faith—2 Timothy 4:7 Barbara J. Clem, known to all as either Bee J, "Mom" or "Nan," 78 years old, went to be with her Lord and Savior, Jesus Christ, on Tuesday, March 29, 2022, in Roswell surrounded by her loved ones. On July 7, 1943, Bee J was born to Dayton and Stella Harris in Tucumcari, NM. She grew up in House, NM, which was a small, tightly knit community, where she learned the importance of helping your neighbors and what really mattered in life—her family. Her parents, known to the family as Granny and Padate, instilled in her corn-fed character and values that made her the amazing woman she was. She passed these traits down to her children and grandchildren through her love, leadership, and prayers. The majority of her career was spent in the legal field, where she worked for numerous attorneys and judges whom she loved and admired. Her career is what led her to find the love of her life, Lloyd Clem. They were married on October 6, 1979, in Roswell, NM. They both continued their careers together in the court system. She became the District Court Clerk of the New Mexico 5th Judicial Court, where she served from June 29, 1992, to May 15, 2007. She became the Court Administrator of the 5th Judicial Court on May 15, 2007, where she served until her retirement on December 31, 2013. During her career, her hard work, commitment, and sweet spirit not only earned her countless friends and co-workers throughout the State of New Mexico, but she also helped achieve great accomplishments for the court systems, one of which was leading the implementation of the first jury software in the 5th Judicial courts. Her loving and caring personality, coupled with her hard work and commitment, made a lasting impact on those she worked with and gained her the love, respect, and admiration of countless people. After retiring, she enjoyed spending time with her family and making cards with "Sister." It would be amiss to not mention the biggest part of her life, even above her family and career—her relationship and faith in Jesus. When she married Lloyd, not only was she getting the love of her life but becoming a part of a family that had a firm foundation in God and His Word. As Lloyd and Bee J. made their life together, Lloyd and his mother, Grandma Ruth, ended up leading not only Bee J. but also Ferrall and Shelly to the Lord, which then abounded throughout the family and coming generations. We are all forever thankful for this legacy and salvation. She was our prayer warrior. Those left to cherish her memories and legacy until the day we meet again are her: ˖ Husband: Lloyd Clem of Roswell, NM ˖ Children: Ferrall and Sue Clem of Roswell, NM; Shelly and Randy Bristow of Artesia, NM ˖ Grandchildren: Jennifer Benton of Roswell, NM; Jason and Mandi Clem of Roswell, NM; Brittany and Josh Amador of Roswell, NM; Colton & Rae Campbell of Brownfield, TX ˖ 10 great-grandchildren ˖ 1 great-great-grandchild ˖ Siblings: Myrl Dean West of Corona, NM; Gayle Luth of Roswell, NM; George & Pauline Harris of Roswell, NM; Vicki Shaw of Dallas, TX ˖ Numerous nephews and nieces Bee J. is preceded in death by her father and mother, Dayton and Stella Harris, brother Bill Harris, sister-in-law Dekka House, brother-in-law Dewayne Shaw, and grandson Jeremy Dale Clem. Blessed to be chosen as Honorary Pallbearers are George Harris, Val Knight, Joshua Amador, and Michael Marshall Honored to serve as Pallbearers are: Ferrall Clem, Randy Bristow, Jason Clem, Colton Campbell, Josh Amador, Tripp Jackson, and Bari Harris In lieu of flowers, the family requests donations be made to your charity of choice. A viewing will be held at Anderson Bethany on Monday, April 4, 2022, from 10:00 am to 12:00 pm. A graveside service will be at a later time for the family. Please take a moment and share a kind thought or memory with Barbara’s family at www.andersonbethany.com.

I have fought the good fight; I have finished the course, I have kept the faith&#8212;2 Timothy 4:7 Barbara J. Clem, known to all as either Bee J, "Mom" or "Nan," 78 years old, went to be with her Lord and Savior, Jesus Christ, on Tuesday, March... View Obituary & Service Information

The family of Barbara J. Clem created this Life Tributes page to make it easy to share your memories.

I have fought the good fight; I have finished the course, I have...

Send flowers to the Clem family.