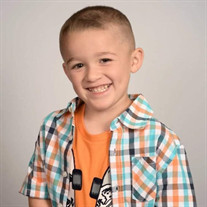 Brandon Casarez 3/15/2015-7/28/2021 On Wednesday, July 28, 2021, although our sweet Brandon lost his battle to a long-term illness, our Lord welcomed another angel into His Kingdom when He took Brandon home. He was born on March 15, 2015 to Bobby Lee Nunez and Stephanie Lyn Powers, in Roswell, New Mexico. Please take a moment and share a fond memory or kind expression of sympathy for Brandon’s family at www.andersonbethany.com. Brandon was a fun loving, vibrant child who enjoyed not only watching cartoons, laughing, and giggling for hours, but he also loved playing with his toys. Among his favorite, were his dinosaurs. With the wild and vivid imagination of a typical six-year-old boy, he could go on dreaming up the fantasies and tales of giant creatures that once roamed the earth. When he wasn’t daydreaming about dinosaurs and their great adventures, his attention was shifted to playing with his cars. Racing them and crashing them into each other and lining them up as if they were in a car show and on display for all to see, always having that favorite car that he dreamed of owning one day. When the dinosaurs slept and the cars were parked, you could find Brandon swimming, which was one of his favorite pastimes that not only was fun for him, but it kept him active and he truly enjoyed it. He was such a sweet boy who won the hearts of many and was dearly loved by all those who had the pleasure of knowing him. Brandon will be greatly missed by his family and friends and his memory will be cherished in their hearts forever. Those left in reverence of his memory are his loving mother, Stephanie Lyn Powers; sister, Destinie; brothers: Isaiah and Randy; grandparents: Mike and Connie Powers; aunt, Jessica Powers Dictman and family; and his beloved Saint Bernard, Bella He is preceded in death by his father, Bobby Lee Nunez. The family would like to give a special thank you to the University of New Mexico Pediatrics Oncology nurses and doctors, and all those who took part in Brandon’s life. Service time is pending and will be announced at a later date.

The family of Brandon Casarez created this Life Tributes page to make it easy to share your memories.

Send flowers to the Casarez family.