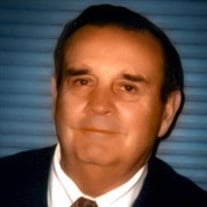 Clarence George Blair was born on March 30, 1931 in Marshall MN to Clarence Sumner Blair and Edna Marie (Austgen) Blair. Growing up in a small farm community, he had carte blanche to the cookie bin at his parent’s grocery store, and spent every Saturday at the 5 cent movies watch-ing such classics as the original Superman series and Westerns. When Clarence was 5 he won a contest at the theatre to find a Spanky look-alike from the Our Gang comedies, which earned him his lifelong nickname “Spanky!” He met his future bride Audrey Ann Deutz at Marshall High School. After high school Clarence joined the Navy and was stationed in Norfolk, VA for 4 years, serving on the U.S.S. Mellette and as an honorary member on the U. S. S. Sea Leopard submarine where he became a Guppy Snorkeler. After his service he returned to Marshall to marry Audrey and they moved to Minneapolis where Clarence began his career as a Court Reporter. The happy couple was relocated to Deming, NM with 2 kids and then to Lordsburg, NM where 2 more children were born. Another 4 kids came along once they moved to Roswell, NM where they settled in to raise their 8 children. Clarence was the Official Court Reporter, Fifth Judicial District, for Chaves, Lea, and Eddy Counties, for twenty-seven years, and helped mentor future Court Reporters from Roswell, as well as a niece in Minnesota. He wrote the Constitution and Bylaws for the New Mexico Court Reporters Association in 1968, He served as President of the New Mexico Court Reporter’s As-sociation, 1968-1971. He went on to member by appointment by the Supreme Court of New Mexico of the Certified Shorthand Reporter’s Board, 1978-1980. He was reappointed in 1982 for another 3 year term and then served as President of the Board. When he retired from the State of New Mexico he continued to freelance as a Court Reporter for 10 more years taking depositions for local lawyers, until 1994, he really loved his job! He was very involved with coaching his 3 boys and local youth with little league baseball and basketball. He loved every sport and was a great coach admired by many kids. He was a member of the Elks lodge as well as the YMCA, where he played handball and basketball. Clarence was a member of St Peter’s Catholic Church where he served two terms as Parish Council President and was on the council for 17 years. Clarence was very involved with the Knights of Columbus which he was first initiated to in 1958 in Deming, NM. Clarence worked his way up the ranks to become Knight of the Year locally in 1969, He became Grand Knight in 1968-1969 for local council 3030, State Council Membership Chairman in 1970-1971, District Deputy, 1971-1972 District 2, Roswell, Alamogordo, and Artesia. He went on to become State Secretary 1971-1972, State Deputy 1972-1974, Vice Supreme Master of the John H. Reddin Province of the 4 corners area to include Arizona, Colorado, New Mexico, and Utah, 1978-1981, and enjoyed many travels and events with his wife Audrey and his fellow Knights and their wives. Clarence was predeceased in death by his wife Audrey, his parents Clarence and Edna Blair, and brother Gene Blair. He is survived by his 8 children, Susyn and Mike Pitts of Bernalillo, NM, Dennis and Terry Blair of Levelland, TX, David Blair of Roswell, NM, Donald and Debbie Blair of Levelland, TX, Barbara and Jeff Mittelstadt of Marcus, IA, Pauline and Len Schnedar of Vista, CA, Mary Ellen and Michael Pothier of Leominster, MA, and Amy and Corey Seward of Phoenix, AZ. 15 grandkids, Joshua Hunt, Sarah Estrada and Jacob Blair, Zachary Blair, Brittany Blair and Keaton Blair, Michael Mittelstadt and Jena Bunt, Brooke, Brandon and Brenna Schnedar, Andrew, Bradley and Mark Pothier, and Nathaniel Seward. 7- 1/2 Great Grandkids, Kaden, Bryson and Kennedy Blair, Cypress and Sawyer Coburn, William and Molly Mittelstadt, and Baby Bunt, due in October. Clarence leaves behind many beloved relatives in Minnesota as well. He is also survived by his loving Beehive family, who made his last two years a pure joy! A Rosary is scheduled for Thursday, September 2nd at 6 pm at Anderson Bethany Funeral Home, and a Funeral Service Officiated by Deacon Howard Herring which will include the Knights of Columbus 4th Degree Honor Guard, and interment scheduled for Friday, September 3rd at 11 am at St. Peter’s Catholic Church. (Masks are Required) The family requests donations are made to Poor Clare Monastery of Roswell, Youth in Sports organizations, Knights of Columbus Charities, Diabetes, Heart, and Kidney foundations, or Any Charity you wish in Clarence’s name. Please take a moment and share a fond memory or kind expression of sympathy for Clarence’s family at www.andersonbethany.com. Clarence’s tribute was written in his honor.

Clarence George Blair was born on March 30, 1931 in Marshall MN to Clarence Sumner Blair and Edna Marie (Austgen) Blair. Growing up in a small farm community, he had carte blanche to the cookie bin at his parent&#8217;s grocery store, and spent... View Obituary & Service Information

The family of Clarence George Blair created this Life Tributes page to make it easy to share your memories.

Send flowers to the Blair family.