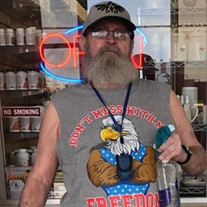 Clifford Earl Tyler passed away on November 4th, 2021 from his longtime home of Roswell, NM. Cliff was born in Roswell, NM to his loving parents Earl and Ethel Tyler on August 4th, 1959. He graduated from Ft. Sumner High School in 1977. He met the love of his life Carolyn Sue Tyler and they were married in the winter of 1983. This December would have been their 38th wedding anniversary. They shared their life together as he worked hard to provide for her and his two daughters as a roofer until he could no longer. Daddy loved being outdoors and one of his favorite pastimes was fishing for catfish with his little brother Robert, dad and cousins. Oh, the adventures they shared! He was a wonderful husband, father and the best grandfather around. He loved nothing more than his grand babies. Cliff was proceeded in death by his parents Earl and Ethel Tyler, daughter Samantha Tyler, grandson Noah Whitney, father-in- law Robert Briggs Sr. whom he loved as a father, and many aunts, uncles, and cousins. He is survived by his wife Carolyn Sue Tyler, daughter Melissa Whitney, son-in-law Christopher Whitney, granddaughters Payton and Madison Whitney, step grandchildren Alexus and Cj Whitney all of Roswell, N.M. He is also survived by his brother Robert Tyler and sister-in-law Debbie Tyler of Clovis, N.M., several aunts, uncles, cousins, and in-law’s whom he loved dearly. To know Cliff was to know a true, genuine soul. He was a person without pretension or ego. At times, he doubted his worth, but anyone that spent time with him quickly experienced his wealth of love and advice. Cliff was a very smart man. Anybody could get the answer they were looking for by asking him. Cliff’s wishes to be cremated are being honored and handled by Anderson Bethany Funeral Home and Crematory - Roswell, NM. 2609 South Main. It was also Cliff’s wishes not to have a memorial. We will have a small memorial at the side of his parent’s grave at a later date. Dad in Heaven Although you sleep in Heaven now You’re not that far away My heart is full of memories And you’re with me every day You lived your life with meaning And with a smile upon your face A world that was full of happiness Is now an empty place People say that only time Will heal a broken heart But just like me and you, Dad It has been torn apart I know that you are at peace now And in a place where you are free Meet me at the Pearly Gates When Heaven calls for me. Clifford's tribute was written in his honor by his family.

Clifford Earl Tyler passed away on November 4th, 2021 from his longtime home of Roswell, NM. Cliff was born in Roswell, NM to his loving parents Earl and Ethel Tyler on August 4th, 1959. He graduated from Ft. Sumner High School in 1977. He met... View Obituary & Service Information

The family of Clifford Earl Tyler created this Life Tributes page to make it easy to share your memories.

Clifford Earl Tyler passed away on November 4th, 2021 from his...

Send flowers to the Tyler family.