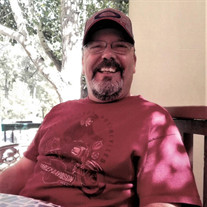 Curtis Skipper, (Curt) (Skip) 56, of Roswell, NM, went to be with our God on Monday, August 30, 2021, in Roswell. At 10:00 a.m. on Tuesday, September 7, 2021, funeral services will be held at Anderson Bethany Funeral Home, Pastor Brett Shangraw of Church on the Move officiating. Interment will follow at General Douglas L. McBride Veteran Cemetery with an honorable see you later! Curtis was born in San Pablo, California, to Andrew D. Skipper and Marilyn S. Skipper on October 24, 1964. The family moved to Roswell, NM, in 1972. He attended Roswell High School. While in school, Curtis belonged to the Roswell youth Striders cross country team. He always talked about his running days and how he beat everyone who ran up against him. To hear him talk, Curtis should have gone to the Olympics. He graduated in 1984. After high school, Curtis went on to the Indian School of Arts in Santa Fe, NM, he had an amazing artistic talent. Anyone who knew him knew that when he got out a canvas with paint and brushes, no matter what the mess looked like in the beginning, it always turned out to be the most beautiful piece of art. That was a great passion of his. After college, Curtis decided to go to the United States Navy in 1986, serving a 6-year term. While in the Navy, he served as a deck fireman. He always talked about wanting to go back to all the places around the world that he got to see. Curtis received a First Sea Service Deployment Ribbon while working on the USS Capodanno. On December 12, 1992, he was Honorably discharged from active duty and transferred to the Naval Reserve. Curtis was a man of many talents and worked in several different occupations. He worked for the Chaves County maintenance department for the past six years. Curtis was a Church on The Move member, where he served in many different ministries, but his favorite was Kids on the Move. Curtis loved all the little kids, but his most gratifying experience was watching them praise and worship our lord. There is where he met his soul mate, Nickie Skipper. They were married on March 8, 2019, in Lubbock, TX. Although they were not married for very long, they made many memories and were genuinely put in each other’s paths for many special reasons that will be treasured forever. Curtis is preceded in death by his father, Andrew D. Skipper; and his grandparents: Mr. and Mrs. WC Skipper Sr. and Mr. and Mrs. Archie Tirey. Those left to cherish and treasure Curtis’ memory are his loving wife, Nickie Skipper and her daughters: Kailynn and Kendal Sanders; mom, Marilyn Skipper; brother, Tim Skipper; sisters: Dorene Higuera, Jill, Andrea, and Kathy Skipper; as well as his nieces and nephews: Lory, Rob, Rachel, Juston, Kyle, Zack, Brandy, Erik, Steven, Joey, Jazmine, and Gino. Curtis was not a stranger to anyone that he met. If you were friends with him, then you have a lifelong friend. Curtis had a big heart and had a special place in it for everyone that crossed his path. Skip you will be dearly missed, but it should give all of us here today a little bit of peace knowing that we will see him again when he greets us with that cheesy smile at the golden gates of heaven. Please take a moment and share a fond memory or kind expression of sympathy for Curtis’ family at www.andersonbethany.com. Curtis’ tribute was beautifully written in his honor by his beloved wife, Nickie Skipper.

The family of Curtis (Curt) (Skip) Skipper created this Life Tributes page to make it easy to share your memories.

Send flowers to the Skipper family.