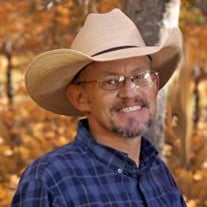 Daniel Lee Mathews went to be with the Lord on March 8, 2022. Please take a moment and share a kind thought or memory with Daniel’s family at www.andersonbethany.com. He was born on July 6, 1973 in Albuquerque, NM to John and Rose Ann Mathews and grew up in Belen. Daniel was active in 4-H and FFA and spent countless hours working at Mathews Custom Meat Market for his dad and family. Daniel asked Jesus into his heart as a young boy at the Assemblies of God Church camp in Mountainair one summer. He had been a member of Christ’s Church since moving to Roswell. He loved to worship God and never cared that he couldn’t carry a tune and was even known for making up his own lyrics. Dan graduated from Belen High School in 1991 and continued his education at NMSU in Las Cruces to become a welder. After receiving his Associates’s Degree, he went on to get his Bachelor’s Degree in Agricultural Extension Education to become an Ag teacher and FFA Advisor. The Lord guided his path down a life Dan cherished and considered his calling. He later went on to earn his Master’s. During his time in college, Daniel met his one and only love, Jimi Sue at an FFA dance at NMSU. Thanks to his sister’s dance lessons, he swept her off her feet and after a few years of dating they ended up marrying in 1994 in Las Cruces. Dan was confident and never doubted that being an Ag teacher was part of God’s plan. Both he and Jimi Sue held on- trusting God to lead them in a blessed life that was more than they could have ever asked for. Daniel’s first job as an Ag teacher was in Los Lunas, NM. Being fresh out of college, he would wear a tie daily so that his students and their parents could distinguish him as the actual teacher and not just another kid. He had the pleasure of teaching there for 14 years and during that time became the parents of three beautiful daughters- Elaina, Jordan, and Kaylee. His girls thought he hung the moon, and likewise, they meant the world to him. He shared his love of hunting, fishing, raising and showing 4-H/FFA animals with them. They were blessed to grow up knowing the lasting impact of a father’s unconditional love. On Father’s Day 2011 Daniel moved his family to Roswell, where he was the Ag teacher for Goddard High School for the last 11 years. He and his girls were immediately welcomed and embraced by the community and just as in previous years, he poured back into it with his heart and soul. For 25 years, Mr. Mathews taught and inspired countless young people to make their lives matter. He loved his students or his “kids” as he would call them and was, himself, a big kid at heart. He was rarely seen without a smile on his face and touched all those around him. He was known as a leader in his community, and was selfless when it came to helping others. Wherever he was, he made lifelong friends, and he will be greatly missed by all who had the honor and pleasure of knowing him. Daniel is survived by his loving wife Jimi Sue and their three adoring daughters Elaina, Jordan, and Kaylee; his mother Rose Ann Mathews; father John Mathews and wife Cookie; sister Lisa Gustin and husband Mike and their children Caleb and Jessica. Those who will also cherish the memories of him are all of his family members, friends and students past and present too numerous to list. He loved each and every one of them. Blessed to serve as honorary pallbearers are: John and Caleb Doss, Mike and Caleb Gustin, Marty and Cody Brantley, Todd and Brenden Carter. Services for Daniel will be held on Wednesday, March 16 at Christ’s Church at 2 pm. A graveside memorial will be held in Mountainair, NM at a later date. In lieu of flowers, the family has set up Mathews scholarship fund through the NM State FFA office. You may donate in honor of Mr. Mathews by clicking the link of scanning the QR Code. https://www.paypal.com/donate/?hosted_button_id=MGVR8NNAJE2G6 Daniel’s tribute was written in his honor by his family.

Daniel Lee Mathews went to be with the Lord on March 8, 2022. Please take a moment and share a kind thought or memory with Daniel&#8217;s family at www.andersonbethany.com. He was born on July 6, 1973 in Albuquerque, NM to John and Rose Ann... View Obituary & Service Information

The family of Daniel Lee Mathews created this Life Tributes page to make it easy to share your memories.

Send flowers to the Mathews family.