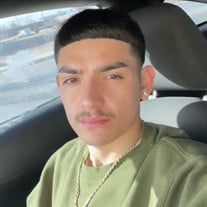 David Albert Gonzales Jr was a caring son, brother, cousin, nephew, and friend. He left this world on December 26,2021 at the age of 18. He was born to Jessica Lozano and David Gonzales Sr on October 23,2003 in Roswell New Mexico. David’s best friend, which he called son was his dog Ruger. David loved spending time with family and friends and enjoyed playing basketball and football. He was a caring young man and was loved by all his siblings, aunts, uncles, and friends. Some of them called him Jr. David was survived by his mother, Jessica Lozano and husband Orlando Guilez, which was his stepfather; his father, David Gonzales Sr and wife Bethany Balow; grandparents: Roberto Lozano and Jennifer Gonzales; great-grandparents: Maria Dolores “Mama Lola” Perez and Ramon Perez, and Josephine Gonzales; siblings: Angel Gonzales, Rogelio Gonzales, Orlando Guilez, Jazabele Guilez, Jazmyne Gonzales, Savanna Gonzales, Aaliyah Gonzales, and Alanis Gonzales; aunts and uncles: Serjio Lozano, and wife Ivonne Lozano, Jesus Roberto Lozano, Jaqueline Lozano, and Elias Gonzales and wife Julie Camarena, Ashley Rutherford, and Juanita Gonzales. Some of his close friends were Chris Herrera and Ethan Benitez. He had numerous other family and friends which he loved and cared for so much. There will be a viewing at Anderson Bethany Funeral Home on Tuesday, January 11, 2022, from 9:00 AM to 5:00 PM. A funeral service will be held on Wednesday, January 12, 2022, at 2:00 PM, at Anderson Bethany Funeral Home. Pallbearers are Orlando Guilez, Angel Gonzales, Rogelio Gonzales, David Gonzales Sr, Elias Gonzales, Chris Herrera, and Ethan Benitez. Psalm 23 “The Lord is my Shepard I shall not want”. Services are under the direction of Anderson Bethany Funeral and Crematory 2609 South Main Street, Roswell New Mexico 88203. Please take a moment and share a memory or kind thought with David Jr family at www.andersonbethany.com.

David Albert Gonzales Jr was a caring son, brother, cousin, nephew, and friend. He left this world on December 26,2021 at the age of 18. He was born to Jessica Lozano and David Gonzales Sr on October 23,2003 in Roswell New Mexico. David&#8217;s... View Obituary & Service Information

The family of David Albert Gonzales created this Life Tributes page to make it easy to share your memories.

Send flowers to the Gonzales family.