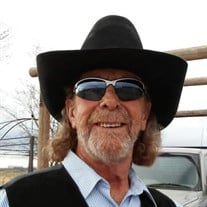 David Alan Merrill, 68, passed away on Tuesday, February 8, 2022, in Roswell, New Mexico. Please take a moment and share a kind thought or memory with David’s family at www.andersonbethany.com A Memorial Service will be held at Anderson Bethany Funeral Home on Tuesday, February 22, 2022, at 2:00 PM. On October 21, 1953, David was born to Jacquelyne Evelyne Mervin and Harold Newell Merrill in San Jose, California. David was raised in Mountain View, California, and Denver, Colorado. He had a wide variety of talents and abilities. David taught college-level art and did public relations work. David worked for channel 4 in Colorado and the Shriners, including performing as a 10 ft. tall clown and “Uncle Sam” in Denver parades and other events. He was a carpenter with his father Harold and Uncle Bud, building, fixing, and flipping homes. David was also a truck driver, painter, artist, and cartoonist for a local newspaper with a weekly weather character “Lil Colfax”. A talented woodcarver. David loved traveling, fishing, hunting, surfing, rock climbing, snow and water skiing. He especially enjoyed cooking and he was good at it. He enjoyed the simple things as well, sunsets, the moon, birds singing, and loved dogs, but he especially loved his grandchildren. David lovingly cared for his father Harold, making his final eight years fun and adventurous. While a prankster, he believed laughter was the best medicine. David is survived by his significant other, Carole; daughter, Mariah and husband Michael; grandchildren: Galen, Carys, and Milah; daughter, Risa and husband Kevin; granddaughter, Karina; stepdaughter, Rhonda and husband Rusty; grandchildren: Alyson, Maegan, R.J., Harvey, Isabelle, and Samuel; stepson, Matthew; grandchildren: Matalyl and Colton; also his niece Tammy who was (more like a daughter) and husband Tom; their children: Joshua and his wife Arielle, Jessica, and Katy; grandchildren: Charlotte, Branson, Beau, Shylah, Addison, Harper, and Theodore; brother, Darrell and wife Kristi; sister, Lynn (Pinky); many, many other family members who were near and dear to his heart; as well as an incredible number of friends, some life-long! And finally, his beloved dogs: Jiggs, Sugar, and Colfax. David was preceded in death by his parents: Jacquelyne and Harold; grandparents; brother, Harold Daniel (Danny); and numerous aunts, uncles, cousins, and dear friends. David’s tribute was written in his honor by his family.

David Alan Merrill, 68, passed away on Tuesday, February 8, 2022, in Roswell, New Mexico. Please take a moment and share a kind thought or memory with David&#8217;s family at www.andersonbethany.com A Memorial Service will be held at Anderson... View Obituary & Service Information

The family of David Alan Merrill created this Life Tributes page to make it easy to share your memories.

Send flowers to the Merrill family.