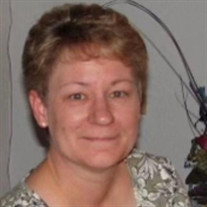 Debra Stanissawczyk, 63 passed away on Sunday, April 17, 2022 in Roswell, New Mexico. Please take a moment and share a kind thought or memory with Debra’s family at www.andersonbethany.com. There will be a Visitation at Anderson-Bethany on Sunday, April 24, 2022 from 1:00 pm to 5:00 pm. Funeral services will be held at Midway Baptist Church on Monday April 25, 2022 at 2:00 pm with Brother Lawrence Lowery officiating. Internment will follow at McBride Cemetery in Roswell, NM. On May 13, 1958 Debra Stanislawczyk was born to Claude and Viola Williams in Hobbs, NM. She attended Dexter High School where she graduated in 1977. She entered the Air Force in 1980. After basic training, she reported to her first duty assignment at Davi-Monthan AFB in Tucson, AZ. In 1982 she was transferred to Randolph AFB in San Antonio, TX. In May 1986 she moved to USAG Hospital, Osan Korea. This was a short duty assignment so in 1987 she was reassigned to Holloman AFB. Shortly after that in 1988, Debra was assigned to USAF Hospital in Wasbaden Germany. In 1992 she moved to Kaiserslautern Germany. Then in 1996, Debra arrived at her last duty station at Scott AFB. Suring her time serving her country she was awarded many medals and ribbons. After retirement on August 1, 2000, she moved back to Roswell, NM where she grew up. Debra worked at several places after retirement but the job she enjoyed the most was driving a school bus for the Palominas School District in Arizona and Hamill Transportation in Roswell. Debra loved to make wood projects with her mother and father. She also enjoyed working with stained glass pieces. She made several beautiful pieces. Debra will be greatly missed by her family and friends. Those left to eternally treasure and cherish the memories of Debra, are her siblings Sharon (Joe) Flores and Steven Williams as well as her beloved nieces and nephews; Anthony (Maureen) Flores, Brandy (Andrew) Marsh, Dena (Miguel) Rincon, Andrea (JR) Hicks, Candice (Raymond) Evartt as well as 14 great-nieces and nephews all of whom she loved very much. As well as many more aunts, uncles, and cousins. Debra is preceded in death by her parents, Claude and Viola Williams, sister Patricia Byrne, Grandmother, Jewel Maple, and nephew Christopher Cones. Blessed to be chosen as Honorary Pallbearers are Raymond Evartt, Tristen Deveraux, David Fores, Chase Verplanck, Cameron Verplanck, and Caden Marsh. Honored to serve as Pallbearers are: Anthony Flores, Miguel Rincon, Miguel Rincon Jr., Andrew Marsh, Austen Evartt, and Colten Evartt. The family of Debra Stanislawczyk wishes to extend sincere thanks to the wonderful doctors and nurses in the CCU at Eastern New Mexico Medical Center and Debra’s Aunt Dora Lard. Debra’s tribute was written in her honor by her family.

Debra Stanissawczyk, 63 passed away on Sunday, April 17, 2022 in Roswell, New Mexico. Please take a moment and share a kind thought or memory with Debra&#8217;s family at www.andersonbethany.com. There will be a Visitation at Anderson-Bethany... View Obituary & Service Information

The family of Debra Kay Stanislawczyk created this Life Tributes page to make it easy to share your memories.

Send flowers to the Stanislawczyk family.