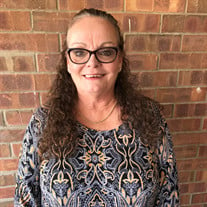 Dianna Novak was born in Portales, NM on November 21, 1960 to James Howard and Patricia McCrary. She was the oldest of four girls. In her early childhood, Dianna enjoyed spending her time at the farm in Arch. Dianna graduated from Roswell High School in 1978. Shortly after that, she married Mike Novak and together they had one child, Kambrea. Dianna enjoyed being outdoors, camping in the mountains, looking for arrowheads, and riding three-wheelers. She had perfected the art of antiquing. Dianna went back to college at ENMU-R and graduated as a Certified Medical Assistant. With her degree, she worked at BCA Medical up until the last few months of her life. Dianna could not wait to be a grandma and loved to spoil her two grandchildren. Dianna and her mother, Pat, shared a special bond. She had an enormous heart and had so much love for all her family and friends. On the morning of Friday, January 1, 2021, Dianna was called home to the Lord. She was surrounded by her loved ones. Dianna is survived by her mother, Pat Davenport of Roswell, her daughter and son-in-law, Kambrea & Jerad Thomas of Amarillo, her grandchildren, Nova and Aceyn Thomas of Amarillo, her sister and brother-in-law, Terresa and Tim Hale of Roswell, her nephew Cody McCrary of Roswell, her niece and partner, Heather McCrary and Thomas Aragon of Roswell, her great nieces and nephew, Abbigaylle and Isabelle McCrary of Roswell, and Brianna and Damien Barbour of Roswell, her best friend/bonus sister, Mindi Darr of Roswell, her bonus children, Breanna and Chris Compian of Austin and Darr and Jeannie Smith of San Antonio, her bonus grandchildren, Miles and Amelia Compian of Austin and Aya and Teagan Smith of San Antonio, her aunt and uncle, Janice and Mike Rice of Albuquerque, and numerous cousins. Dianna is preceded in death by her father, James Howard McCrary, her sisters, Pamela McCrary and Michelle Ward, and her nephew, Skylar Ward. Services will be held Tuesday, January 12, 2021 at 10:00 a.m. at Anderson Bethany Funeral Home. Masks are required for attendance. A special thanks to the BCA Medical family for all of their continued support for Dianna and her family and a special thanks to XI KAPPA sorority for their support to the family during their time of grieving as well as all the individuals who contributed to the family during this time. Please take a moment and share a kind thought or memory with Dianna’s family at www.andersonbethany.com. Dianna’s tribute was written in her honor by her family.

Dianna Novak was born in Portales, NM on November 21, 1960 to James Howard and Patricia McCrary. She was the oldest of four girls. In her early childhood, Dianna enjoyed spending her time at the farm in Arch. Dianna graduated from Roswell High... View Obituary & Service Information

The family of Dianna Lynn Novak created this Life Tributes page to make it easy to share your memories.

Send flowers to the Novak family.