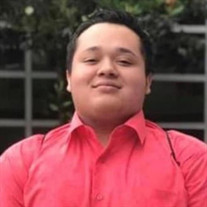 Dominic Jacob Peña, 19, passed away on Friday, March 25, 2022, in Roswell, New Mexico. Please take a moment and share a fond memory or thoughtful expression of sympathy for Dominic’s family at www.andersonbethany.com. There will be a Viewing for Dominic at Anderson Bethany Funeral Home on Wednesday, April 6, 2022, from 11:00 AM to 6:00 PM. Family and friends will gather for a Funeral Service at Christ Church on Thursday, April 7, 2022, at 11:00 AM. On October 21, 2002, Dominic was born in Roswell, New Mexico, to Jessica Nunez and Tommy Pena Jr. He spent the last eight years in Texas, where he attended school and spent time with friends and family. Dominic attended Anna High School in Texas and would have graduated this year. He was very close with his younger brother, J-Jay. Dominic was always there to protect him. He enjoyed watching football games and was a huge fan of the Miami Dolphins. Dominic liked investing in the stock markets and was interested in law enforcement to be a police officer. King Durag’s (Dominic) favorite color was purple because it was the color of royalty. A very important part of his life was all the family from both Texas and Roswell. Those left to cherish Dominic’s memory are his parents: Jessica Nunez and Tommy Pena Jr; grandparents: Mary Nunez of Carlsbad, New Mexico, Jesse Yougas and Carol Garcia of Anna, Texas, Lisa Larez and Alberto Larez of Roswell, New Mexico, and Tommy Martinez of Roswell, New Mexico; great-grandmothers: Rosa Nunez of Dexter, New Mexico, and Virginia Moreno of Roswell, New Mexico; siblings: J-Jay Barrera, Haylee, Jon Michael, Hector Jr., and Jesse Aguirre; aunts and uncles: Josh Nunez, Donna Yougas, Jesse Yougas Jr, Lilly Garcia, Erica Pena, Desiree Pena, Nikita Pena, Ashley Pena, Jerry Najar, Kimberlie Martinez; several great-aunts and great-uncles; numerous cousins in both Texas and New Mexico; as well as his beloved dog, Bruno. Dominic is preceded in death by his baby sister, Aryana. Honored to serve as Pallbearers are: J-Jay Barrera, Jesse Yougas Jr., Jesse Yougas Sr., Abel Yougas, Jerry Najar, and Felix Carvajal. Dominic’s tribute was lovingly written by his mother, Jessica. A special “Thanks” to the family and friends of Texas and New Mexico that helped lay Dominic to rest. He’s in the sun, The wind the rain, He’s in the air you Breath with every breath you take He sings a song of hope and cheer, There’s no more pain, no more fear. You’ll see him in the clouds above, Hear him whisper words of love, You’ll be together before long, Until then, listen for his songs.

Dominic Jacob Peña, 19, passed away on Friday, March 25, 2022, in Roswell, New Mexico. Please take a moment and share a fond memory or thoughtful expression of sympathy for Dominic&#8217;s family at www.andersonbethany.com. There will be a... View Obituary & Service Information

The family of Dominic Jacob Pena created this Life Tributes page to make it easy to share your memories.

Send flowers to the Pena family.