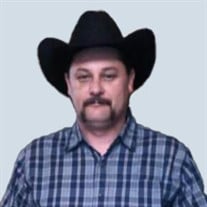 Donald EJ Flores, age 48, passed away on Wednesday, May 25, 2022. Please take a moment and share a kind thought or memories with Donald’s family at www.andersonbethany.com. SERVICES: There will be a memorial service for friends and family at 11:00 a.m., on Saturday, June 11, 2022 officiated by Michael Silva at the Anderson Bethany Chapel in Roswell, New Mexico. On April 30, 1974, Donald was born to Onalisa Flores in Roswell, NM. He attended Goddard High School. He participated in band, auto shop and other related activities until he graduated. He went on to complete degrees as a Master Technician at Universal Technical Institute in Phoenix, AZ specializing in automotive and diesel repair, as well as heating and refrigeration. He married Angela Wheat in June of 1995 in Roswell, NM. They had 2 children together. Later he met Micky Vaughn who would become his life partner in April, 2003. Together they raised 5 children. Donnie took pride in all he did and was a dedicated partner and provider for his family. He held many positions as a Master Technician and certified CDL driver throughout his career. He worked for Pine Lodge Truss, H & R Trucking, L & F Distributors, Pecos Valley Equipment and Southwest Disposal. He was also a part-time driver for JTM Trucking. He served with the East Grand Plains Fire Department as a volunteer firefighter for many years. When not working he enjoyed spending time with his family and friends; watching the Greenbay Packers; cookouts and enjoying a cold beer; sitting by the bonfire; and horseback riding with his family. He was a jokester and had a contagious laugh. He was always humble, never wanting to call attention to himself but eager to help others shine. He was kind-hearted to a fault and never knew a stranger. He loved his children above all others and tried his best to lead them in the right direction. His smile will never be forgotten. He will be forever missed by all those who dearly loved him. SURVIVORS: Those left to eternally treasure and cherish memories of Donnie are his Life Partner – Micky Vaughn; Children: Dakota, Lane, Hailey, Cheyenne, Micheal, Nicole and Mckayla Flores. Mother - Onalisa Flores, Stepfather – Alan Smith; Siblings: Autumn Nunez and Kristi Horton (Gabriel); Nieces -Meadow Nunez and Summer Hilton; Nephew – River Hilton. Other family members include: Rudy Flores (Carmen); Liz Flores; Jimmy Flores (Terry); Sonya Rodriguez (Orlando); Arron Flores; Max, Tommy and Mark Flores; Justin Gaussoin (Gianna), James Flores (Alyssa); Janika Flores; Orlando Jr. and Elijah (Angel) Rodriguez; Joseph and Erica Flores, Youllana Montoya, Kayzel Flores, Nico Gaussoin, Damyn Rodriguez, and Malakai Rodriguez. PRECEDED: Donnie was preceded in death by Great-Grandparents: Donicio Chavez and Ona Juarez; Grandparents: Max and Elisa Flores; Uncle - Robert Flores; and Cousins - Robert Flores, Jr. and Myranda Flores. Donnie acquired many friends throughout his lifetime and he cherished those relationships. The family wishes to extend sincere thanks to Justin Martinez and his wife for their constant support and encouragement when Donnie was discouraged or just needed to talk. Donald accepted Christ as his Lord and Savior and although our hearts are broken we take comfort in knowing we will see him again. This tribute was lovingly written in Donald’s honor by his family.

Donald EJ Flores, age 48, passed away on Wednesday, May 25, 2022. Please take a moment and share a kind thought or memories with Donald&#8217;s family at www.andersonbethany.com. SERVICES: There will be a memorial service for friends and family... View Obituary & Service Information

The family of Donald Flores created this Life Tributes page to make it easy to share your memories.

Send flowers to the Flores family.