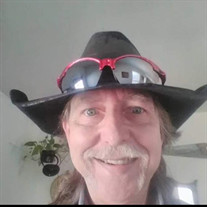 Donald W. Johnson “Donnie” was born on April 7, 1958, in Roswell and passed away on Sunday, February 6, 2022. He has gone to be with Jesus so we will see him again. Please take a moment and share a kind thought or memory with Donnie’s family at www.andersonbethany.com When Donnie was a child, he attended Washington Ave. Baptist Church and was saved and baptized. After he returned to Roswell to be closer to family, he began to attend Bykota Baptist Church, where he had continued to attend. We loved him, and he will be missed by all who knew him. For the first 9 years of his life, his mother was Patricia Ann Johnson ( Phillips ). He had two brothers, Mark Johnson and Tim Johnson. We lost Pat to lung cancer. God gave me another good woman who took responsibility for three boys when she had two boys, and we became a family of seven. Linda Brandt became Linda Johnson and Ron, and Curtis Brandt became Ron and Curtis Johnson. Three years later, Sidney came along, and now we were a family of five boys and a girl, all born in Roswell. Donnie graduated from Roswell High School in 1976. In his earlier years, he had all sorts of jobs. The nearest thing to a vocation he had was being a clerk in an Alsup’s store. Donnie worked at a number of stores in Roswell and Albuquerque. He wasn’t much of a collector, but he sure did like quality boots and western hats. Donnie loved cats and had a dog that was his constant companion. Those who preceded Donnie in death were his grandparents:L Mr. and Mrs. O.W. Phillips, Dero and Doris LeFevers, as well as Max Johnson and Fay Fisher. All of his Uncles and Aunts are gone but three. Donnie still has a number of nieces, nephews, cousins that have survived him. He never married and had no children. Donnie had a good relationship with his family. Mark married Tandra, Ron married Nina, Curtis married Laura, Tim married Jennifer and Sidney married Wes. The family of eight is now a family of seven plus spouses is 12. Donnie’s presence at family functions will certainly be missed by us all. The memorial service will be held at Bykota Baptist Church, 2106 E. Pine Lodge Road, at 11:00 AM on Saturday, February 26. Pastor Don Johnson will officiate. Donnie’s tribute was written in his honor by his family.

The family of Donald Warren Johnson Jr. created this Life Tributes page to make it easy to share your memories.

Send flowers to the Johnson family.