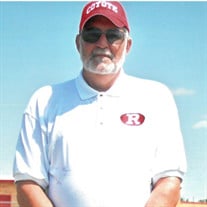 Donnie “Coach” Rowland January 16, 1953 – February 19, 2022 On January 16, 1953, Donnie was born in Eastman, Georgia, to Fred and Bertie Rowland. He graduated from Cochran High School in Cochran, Georgia, and attended the University of Middle Georgia. Donnie was a veteran of the United States Air Force. He was the beloved husband of Lanell Brockman, who he married in 1992. Donnie received a bachelor’s degree in education in 1994 from ENMU in Portales, NM. He was employed at Roswell High School from 1994 to 2011, where he was a freshman football coach who taught special education, Life skills, and woodshop. He was an involved member of Pecos Valley Horse Shows and Chaves County Sherriff Posse playdays from 2007-2011 and an umpire for softball during the summers. Known as “Coach Rowland” to many, Donnie loved sports and his students. He was a member of Midway Baptist Church and a member of the choir, and he loved to sing. Donnie was loved by all who knew him. Those left to cherish memories of Donnie are his wife of thirty years, Lanell Brockman; two sons: Sammy Brockman and wife Lori of El Paso, Texas, and Shane Battle and wife Brandi of Roswell, NM; daughter, Trisha Brockman of Ruidoso, NM; grandson who he raised, Christopher Battle of Albuquerque, NM; eleven grandchildren; two great-grandsons; mother, Bertie Rowland of Cochran, Georgia; two sisters: Shelbie Purser and husband Ernie, Stephanie Dabbs and husband Lonnie; and numerous nieces, nephews, cousins, and many friends. Donnie was preceded in death by his father, James Fred Rowland and brother, Jerry Wyndel Rowland. Special “Thanks” to Interim Home Health, Encompass Hospice, Dr. Wulf, Maria Gonzales (CNA) and Naomi Myers (CNA). In lieu of flowers, the family suggests donating to the Baptist Children’s Home in Portales, NM. Plans for a private memorial graveside service will be placed at a later date.

The family of Donnie "Coach" Rowland created this Life Tributes page to make it easy to share your memories.

Send flowers to the Rowland family.