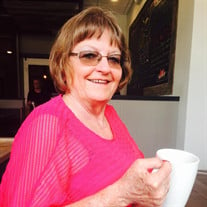 Doreen Mae Carter “Momma Doe” A life well-lived. On Monday, April 18th, 2022, Doreen Mae Carter, 73, of Hagerman, passed away in Roswell, NM surrounded by loved ones. A celebration of life will be held at Hagerman Community Center Monday, May 2nd, 2022 at 2 PM, with Pastor Raymond Derrick officiating. Interment will be held in Santa Fe National Cemetery at a later date. On February 20, 1949, Doe was born to Lecil L. and Sarah M. Warren in El Centro, California. She attended several schools in Texas, Washington, and Oregon. Doe proudly held the title of Rodeo Queen in Yoncalla, Oregon in 1965. In 1967 she graduated from Del Rio High school. She married Roy Henderson, in Del Rio, Texas in 1967. Together they had three children: Gayle, Shayne, and Shawn. Doe then married the love of her life, Mickey Carter on June 8th, 1974, in Escalon, California. In 1976, they moved to Hagerman, New Mexico, where they had their daughter Michelle that same year. While they lived out their lives in Hagerman and raised their three children, and a handful of grandchildren, they met many lifelong friends who became family. She held several offices for VFW Auxiliary, Post 2575, where her husband Mickey was a Life Member. During her life, she wore many hats! She worked at Sears and Roebuck, as well as driving a cuber, and truck, for B.E.Green & Son. She attended college at ENMU-R, where she received her certificate in bookkeeping and accounting. After, she kept herself busy with many other jobs at TMC, Manpower, Booher Sand & Gravel, OK Grocery, and American Aggregate. During her various places of employment, she made many very close friends whom still hold her near, and dear to their hearts. She is preceded in death by; her Daughter Gayle DeLynn, brothers; John Chauvin and Dee Warren, Her mother and father; Sarah and Lucky Warren, Her husband Mickey Carter, and her Grandson Johnathan Carter. Doe is survived by her children; Shayne (Wendy) Carter of Burleson, TX; Shawn Carter (Sherrie) of Hagerman, NM; and Michelle Carter of Capitan, NM. Grandchildren; Eric Carter (Erika), Chance Carter, Shantel Carter, Iris Losoya, Sarah Booher (McCray), Anthony Burge, Terry Burge, Sunshine Losoya, Michaela Hudson, Shelby Carter, Derrick Hudson, and Brileigh Hudson, and eight Great Grandchildren, Sisters-in-law; Bonnie Warren and Cindy Barksdale, and several nieces and nephews. Her laughter was the perfect remedy for homesickness, and she had a soup to heal any heartache or pain. She lived and taught others to live life wholeheartedly, with a strong mind and opinion, feet grounded, and with a phone that always dialed home. She had such a very special and unique bond with all she loved. She definitely had her moments in the sun, where she truly shined more precious than gold; like dancing with Mickey, singing and entertaining her friends, and cherishing times, and adventures with her children and grandchildren. Those will always be the first things many of us remember about her. Doe’s life was truly, a life well lived... The family would like to extend a special thanks, and our great appreciation to Lovelace Regional Hospital and its staff, Doe’s special friends; Rudy Medrano, Kristie Dunnahoo, Kelly Thomason, and Rosie Perez all who stayed in touch and visited with her often, during the last chapter of her life, as well as Sherrie, and Missy, for caring for her in her final hours. Written with love, Sarah Booher.

The family of Doreen Mae Carter created this Life Tributes page to make it easy to share your memories.

Send flowers to the Carter family.