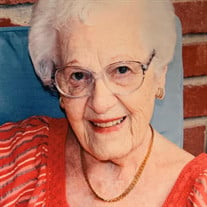 Doris Evelyn Haskamp Whiting born August 14, 1928 in Baltimore, MD to Evelyn Baker Haskamp and William Frederick Haskamp who predeceased her. Doris graduated from Eastern High School in 1945 while working as a secretary, she attended adult evening courses offered in at the University of Maryland to include journalism, sculpture, oil painting, charcoal, pastel, sketching and others. On June 4, 1949 she married her soulmate and forever love, Howell Travis Whiting. They were blessed with four children: Philip Lee, Wayne Alan, Diane Cherie, and Roy Russell. Doris and children were fortunate to join Howell, an army officer, on his tours of Ft. Richardson; Alaska; Verdun, France; Ankara, Turkey, and many stateside posts. In 1971, Doris and “Howie” (Lt. Col., ret) chose Roswell, NM for their retirement home. From 1976-1990 Doris was employed at the Roswell Chamber of Commerce first as Director of Retirement Services then in 1980, became the Manager. Doris and Howie enjoyed meetings of the Retired Officers Association Chapter MOAA. In 1972, Doris joined the Chaparral Rockhounds, the Rocky Mountain Federation of Mineralogical Societies, and the American Federation of Mineralogical Societies. They also traveled in R.V. caravans with rockhound friends in many states to compete and show club cases, winning many awards. Doris is survived by Philip (Carmen) of Phoenix, AZ, Wayne Whiting and Diane Weir of Roswell, NM. She also enjoyed every minute spent with her many grandchildren and great-grandchildren. Beloved son Roy Russell predeceased her in 2011 and cherished daughter-in-law Lisa Ann Whiting in 2008. Love of her life, Howell Travis predeceased her in 2012. She was a member of Trinity United Methodist Church and United Methodist Woman. Hobbies included oil painting, crewel embroidery, reading “cottage” mystery novels. She built over 15 dollhouses and miniature room boxes along with making and dressing miniature porcelain dolls, all in 1” to 1 ft. scale. Please take a moment and share a kind thought or memory with Doris’s family at www.andersonbethany.com. Doris’s tribute was written in her honor by her family.

The family of Doris Evelyn Haskamp Whiting created this Life Tributes page to make it easy to share your memories.