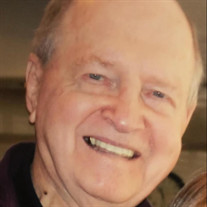 Obituary Doyle Cozzens, 1932-2022 Doyle Cozzens, 89, passed away on May 14, 2022 in Roswell, New Mexico. Please take a moment to share a kind thought or memory with Doyle’s family in the online register book at www.andersonbethany.com There will be a memorial service on Saturday, June 11 @ 10:00am at Christ’s Church, 2200 N Sycamore Ave, Roswell, to celebrate Doyle’s life on this earth. Interment will follow at the Cozzens’ family plot in the Capitan cemetery. On December 9, 1932, Doyle was born to Seymour McKinley (Primo) Cozzens and Sallie Jane Goode in Noodle, Texas. He attended Capitan High School, after which he moved to California and attended Pasadena College, where he graduated with his bachelor’s degree. He met and later married his beloved wife, Jeanne Floyd, in Pasadena, California on November 25, 1953. Doyle and Jeanne raised a family of one son and two daughters, living in Pasadena (or nearby communities) over most of their adult lives. Doyle and Jeanne were members of the Church of the Nazarene. Prior to retirement, Doyle worked as a chemist, then as a franchise restaurant owner, then as the packaging manager, first for Stuart Pharmaceuticals and then Johnson & Johnson in Pasadena. After several years of retirement in Southern California, Doyle and Jeanne moved to Roswell in 2006, where several of his brothers and sisters were living. Although the move to New Mexico made it difficult for Doyle to continue one of his favorite pastimes (deep sea fishing), it did facilitate one of his other joys in life, which was to visit with his many friends and family, face-to-face…over the phone…and over the Internet, in a much more relaxed environment. Doyle was preceded in death by his beloved wife, Jeanne, his older brothers, Wayne Cozzens (and wife Pat) and L.C. Cozzens (and wife Mary Lou), his older sisters, Cornelia Grannis (and husband Walter) and Eileen Parsons (and husband Bob), one of his younger sisters, Jane Cozzens, and a niece, Coleen Grannis and two nephews, Chuck Grannis and Gary Cozzens. Doyle is survived by his younger sister Marilyn Cozzens, and his younger brother Ken Cozzens (and wife Cindey); also, Doyle’s son, Dr. Michael Doyle Cozzens (and wife Lisa), his daughters, Sally Jean White (and husband Ken) and Linda Jane Schultz-Ludwig (and husband Carl Ludwig). Doyle is also survived by twelve grandchildren, including Sharalee K. Cozzens, David M. Cozzens, Samuel Kennedy White III (and wife Nicole), Andrew White (and wife Aumanda), Elisabeth White, Kelli White Luna (and husband Ray), Katelin Schultz, Timothy M. Schultz, and Matthew Schultz, Vanessa Baldwin (and husband Matt), Clayton Fredricksen (and wife Sharla), and Kristin Ludwig, and twelve great-grandchildren, Samuel Kennedy White IV, Andrew White Jr., Lukas White, Brianna and Alex Blaylock, Ben and Josh Hester, Robert Luna and Louis Luna, and Ridley, Emmett, and Lennox Fredricksen. Doyle is also survived by numerous nieces and nephews (and spouses), including Peggy Winchester (husband Larry), Carolann Meekins (husband Dan), Glenda Sears (husband Jeff), Gail Scott (husband Dickie), Grace Moore (husband Mike), Dr. Bob Parsons (wife Pat), Dr. Sally Parsons, Janet Thorson (husband Kurt), Debbie Harrelson (husband Colt), Diane Parsons White (husband Phelps), Rob Cozzens, Christy Mages (husband Cris), Cindy Ross, Jenni Cozzens, Tom Grannis (Teri), Barbara Rogers (husband Joel), Tek Grannis, Bob Gustafson and Lori Hoffman. In addition, there are also numerous grandnieces and grandnephews. These dear family members as well as his many wonderful friends will be missing Doyle’s kindness, concern, humor, and generosity. Doyle and his family do not urge donations to be made to any particular charity in his honor. Instead, following his example in life, the family urges everyone who knew and respected Doyle Cozzens to be generous with their time and treasure, first to the Lord, God of all creation, and then especially toward family and friends, as well as to the hurting people we all encounter, as these are all that truly matter in this life.

Obituary Doyle Cozzens, 1932-2022 Doyle Cozzens, 89, passed away on May 14, 2022 in Roswell, New Mexico. Please take a moment to share a kind thought or memory with Doyle&#8217;s family in the online register book at www.andersonbethany.com There... View Obituary & Service Information

The family of Doyle Cozzens created this Life Tributes page to make it easy to share your memories.

Send flowers to the Cozzens family.