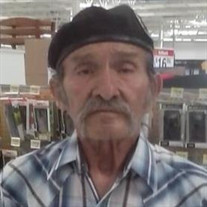 Edward V. Romero, 73, passed away on June 3, 2022, in Roswell, New Mexico. Please take a moment to share a kind thought or memory with Edward’s family at www.andersonbethany.com. There will be a funeral service Friday, June 10, 2022, at 2:00 PM at Anderson Bethany Funeral Home, with Internment to follow at McBride Cemetery. On May 26, 1949, Edward was born to Aristotle and Francisca Romero in Hondo, New Mexico. He attended Hondo Valley High School, where he graduated on May 12th, 1967. Shortly after graduating high school, he enlisted in the Army on May 29th, 1967. During this time, Edward served his country faithfully, was awarded many medals and honors, also learned mechanics while in the Army and utilized those skills to become a jack of all trades. He was the beloved spouse of Regena G. Romero who passed away in 2000. Not only did he do construction on bridges, dams, and houses, he also was a long-haul truck driver for a time. Edward will always be known to those closest to him as the kindest old codger you ever knew. He is survived by his daughters: Laveta A. Romero (Dave) and Corinne L. Dill (Joesph S. Dill); son, Vincent A. Romero; sisters: Bennie Flores (David Flores) and Floripe Jauregui; brother, Louis Romero; grandchildren: Kurtis Root (Laysha), Katie Fults (Robert), Xena Root, Gabrielle Romero, Jarid Romero, Millisen Dill, Arianna Dill, Vincent Romero and Isaiah Romero; great-grandchildren Anthony, Ky-Ren, Dominic, Mitchell, Kira, and Aleyah; Best-friend, Pete Salazar (Nancy); and numerous nieces and nephews. He is preceded in death by his wife Regena G. Romero; son Anthony S. Romero; brothers: John Romero, George Romero and Tony Romero; sister, Mickey Sanchez. Edward’s tribute was lovingly written by his family.

Edward V. Romero, 73, passed away on June 3, 2022, in Roswell, New Mexico. Please take a moment to share a kind thought or memory with Edward&#8217;s family at www.andersonbethany.com. There will be a funeral service Friday, June 10, 2022,... View Obituary & Service Information

The family of Edward Vincent Romero created this Life Tributes page to make it easy to share your memories.

Send flowers to the Romero family.