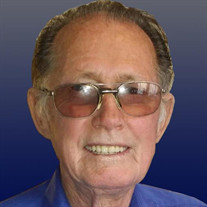 Eloy Montoya Salsberry, age 83, was born to Fernando Salsberry and Lorenzita Montoya Sedillo on January, 21, 1938, in San Patricio, NM. Eloy passed away at home on Sunday, August 22, 2021, surrounded by his loving family. Eloy was raised in Artesia, NM, where he met his loving wife, Ricarda (Rickie) Salsberry. Eloy and Rickie celebrated 60 wonderful years of marriage on June 15, 2021. Their marriage union consists of a daughter Jo Anna Salsberry; a son Rodney Eloy Salsberry and wife Vangie; grandchildren: Elizabeth Marquez and husband Tony, Santiago Eloy Salsberry, great-grandson Mr. Baylee Marquez; sisters: Della Lopez and Husband, Frank, Ellie Segura and late husband, Sokie; brother, Martin Sedillo and wife Sulema. He lovingly assisted in raising Vida Palma as his own daughter. Also, family and friend Tina Paz was very special to him. Eloy leaves numerous nieces, nephews, and Godchildren who loved and respected him deeply. So much so that some were given their birth names after him (Jeffery Eloy and Jeffery Eloy Palma, Jr.) Eloy was preceded in death by his parents and siblings, including Freddie Salsberry, Natalia Sosa, Danny Sedillo, and his baby sister, Cerina Salmon, who passed away on August 23, 2021, shortly after Eloy’s passing. Eloy was known as the “Culligan man” when he worked for Culligan Water Systems for numerous years in his early working years. He also worked in construction and as a truck driver for many years until he retired. Eloy enjoyed hunting and, most of all, family gatherings in his home. Joyous moments were the time and visits he spent with his Great-grandson. He lived long enough to impact Mr. Baylee’s life as well. He will truly be missed by all who loved him. On Friday, August 27, 2021, services will be held at Our Lady of Grace Church in Artesia, NM. Viewing is scheduled from 8:30 AM – 9:30 AM, followed by a rosary from 9:30 AM – 10:00 AM and Mass at 10:00 AM. Burial will be at Woodbine Cemetery following the Mass. MASKS WILL BE REQUIRED! Pallbearers: Paul Brizeno, Manuel Dimiz, Rudy Florez, Frank Lopez, Jeff Palma, and Diego Valenzuela. Honorary Pallbearers: Max Armendariz, Andres Brizeno, Jaime Brizeno, Manuel Bustillo, Chris Huerta, and Hiram Ortega. The family would like to thank Kindred Hospice for all the medical assistance and support provided during this time. Especially Glynn Shelton, Rosalia Bravo, and Tekisha Fauntleroy. The family would also like to thank all those involved in ensuring that Eloy received the best care possible during his illness. Please take a moment and share a kind thought or memory with Eloy’s family at www.andersonbethany.com. Eloy’s tribute was written in his honor by his family.

Eloy Montoya Salsberry, age 83, was born to Fernando Salsberry and Lorenzita Montoya Sedillo on January, 21, 1938, in San Patricio, NM. Eloy passed away at home on Sunday, August 22, 2021, surrounded by his loving family. Eloy was raised in... View Obituary & Service Information

The family of Eloy Montoya Salsberry created this Life Tributes page to make it easy to share your memories.