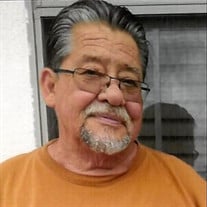 Ernest Giron, 70, passed away on Wednesday, October 20, 2021. He was preceded in death by his parents: Ernesto and Flora Giron; along with his spouse, Inez Lucero; baby sister, Beatrice; brother, Floyd; brothers-in-law: Freddie Padilla and Eddie Servantez; great-niece, Jazabelle Hernandez; and a special friend, Eugene Garcia. Ernie was born to Ernesto and Flora Giron on December 27, 1950. He lived in Roswell until he left for the Navy in November of 1969. Ernie was stationed at Navsta, Pearl Harbor, until honorably discharged and returned home to Roswell. He worked at the Rehabilitation Center until he retired in 1997. In between Ernie’s hobbies, including fishing, you could find him at Bonita Lake every opening day and every weekend after. He also enjoyed doing upholstery, where he took very much pride in his work and met numerous friends. Of anything Ernie enjoyed most was being a Popo, his grandkids meant the world to him, as he did to them. If he wasn’t attending his grandson’s baseball games, he was attending band concerts with his granddaughter’s. In Ernie’s free time, he was most always found at garage sales, the casinos, or his cabin. He and his brother, Eddie, spent numerous weekends there. Ernie was a loving spouse, the best dad, and Popo. He always went over and beyond to ensure his family was always taken care of and never went without. Ernie was also blessed with two extra grandbabies with whom he had a very loving special bond, Isaiah and Josiah, and they loved their Popo very much. Along with them, those also left behind to cherish his memories are his daughter, Renee Ramos; grandchildren: Robert Gonzalez and Alyxandra Gonzalez; grand-grandchildren: Jeremiah, Sylvint and his “Chilindrina” Renezame Gonzalez; siblings: Lucy Padilla, Dorothy Servantez, Flora, and Ben Vigil; brother, Eddie Giron, whom he had a very special bond with; numerous nieces and nephew; a few close friends: Felipe Rodriguez, Robert (Tito) Mendoza, Max Johnson, Ken Wundernich, Roman Chavez, George Hernandez, and Irvin Marujo to name a few.; along with his best friend and roommate his dog, “Perra.” The family would like to extend a heartfelt Thank You” to Eastern New Mexico Medical Center- ICU Unit staff for doing all they did, Anderson Bethany Funeral Home, and Pastor Mark Green. May God continue to bless you all. A Memorial Service will be held at Anderson Bethany Funeral Home Chapel on Saturday, October 30, 2021, at 12:00 PM. The family of Ernest would like to invite you all to the reception following the services at the Elks Lodge, 1720 N. Montana. Please take a moment and share a kind thought or memory with Ernest’s family at www.andersonbethany.com. Ernest’s tribute was written in his honor by his family. LETTING GO The Angels gathered near your bed so very close to you. For they knew the pain and suffering that you were going through. I thought about so many things as I held tightly to your hand. How I wished that you were strong and happy once again. But your eyes were looking homeward to that place beyond the sky. Where Jesus held His outstretched arms. It was time to say goodbye. I struggled with my selfish thoughts for I wanted you to stay. But Jesus knew the answer and I knew He loved you so. So I gave you life’s greatest gift, The gift of letting go.

Ernest Giron, 70, passed away on Wednesday, October 20, 2021. He was preceded in death by his parents: Ernesto and Flora Giron; along with his spouse, Inez Lucero; baby sister, Beatrice; brother, Floyd; brothers-in-law: Freddie Padilla and Eddie... View Obituary & Service Information

The family of Ernest Giron created this Life Tributes page to make it easy to share your memories.

Send flowers to the Giron family.