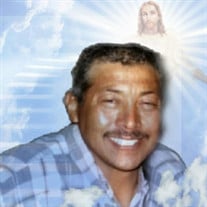 Our beloved Felix Garcia, better known as “Boy,” passed away on May 27, 2022, in Artesia. “Boy,” always loving, kind, generous, and selfless, has returned to the Lord after fighting his best fight; ever strong-willed and resilient ‘til the end. He was met with open arms in Heaven by his Mother, Lucinda, and his Father, Felix Garcia. Please join us as we gather together in his memory. We would be so grateful if you could please take a moment and share a kind thought or memory with the Garcia family at www.andersonbethany.com. There will be a Rosary on Thursday, June 2, 2022, at 9:30 AM at Our Lady of Grace in Artesia New Mexico, with a Mass to follow at 10:00 AM. Inernment to follow at Woodbine Cemetery. A reception will be held at St. Damian Hall at Our Lady Grace starting at 2:00 pm. Honorary Pallbearers: Javier Jimenez, Sebastian Trujillo, Lorenzo Leon, Mario Salinas, Samuel Rodriquez, Robert Fernandez, Fabian Alvarado, and Robert Chavez. “Boy” was born on April 17th, 1966, to Felix and Lucinda Garcia. With 5 older sisters, he was the only son, and the baby of the family. He graduated from Artesia High School, where he was handsome, popular, and well known, especially for his talented athletic skills while playing football with the Artesia Bulldogs. Yes, he was none other than a BULLDOG STAR! He upheld tremendous Bulldog Pride!! “Boy” met his wife, Mary J. Salinas, on June 2006. They were together for 7 years before they officially married on April 26, 2013 at Artesia Magistrate Court. They did not have any children together, but they accepted each other’s children and grandchildren as their own. Not Step, Not Half… just ‘Family!’ They shared their lives together in Artesia, and their friendships were greatly cherished and appreciated. He lived a fulfilling life as a husband, father, grandfather, brother, and uncle. “Boy” is survived by his wife, Mary J. Garcia; his son Jonathan and wife Katrina Garcia; his daughters – Jacqueline Garcia and husband Javier Jimenez, and Jocelyn and husband Sebastian Trujillo; including Jewllysa and Mikkel Baeza, and Tori and Luciano Ponce; his sisters-Louisa Aranda, Terry Franco, Rosa Jimenez, Carolina Rodriguez ,Anita Brewer. Also, by his many grandchildren- Jayvien, Jonovan, Jonathan, and Audrianna Garcia. Jiselle, Jonah, and Julian Jimenez. Joel and Faith Trujillo. Including, A’Rayah, Danny III, Martha, Nehemiah, Jaxsin, Aubri, Jaylee, Rylee, and Lukas. “Boy” loved and was grateful for his many wonderful nieces and nephews as well, on so many different levels, each with whom he had a unique relationship. He was Self-employed for many years. He was known as the Go-To-Guy, and was a master of all trades, including but not limited to, working as a mechanic or in construction. He was an “early riser,” and his daily routine consisted of walking to his parent’s house every morning for coffee, breakfast, and conversation. He loved his Mother’s coffee! In particular, he loved the outdoors, and spent the majority of the day staying busy, and working outside while blasting his Tejano music which he enjoyed. He was a great listener, and was always very compassionate and ready to help someone in need. His faith and strength never wavered in the face of adversity, nor in all the other challenges and obstacles he faced throughout his life’s journey. His always “laid back” and “down for anything” attitude is what we will miss the most. He will be greatly missed, and will live in our hearts forever. We love you “Boy!” Special thanks, family and friends, for all of your dedication and support during this difficult time.

The family of Felix Garcia Jr. created this Life Tributes page to make it easy to share your memories.

Our beloved Felix Garcia, better known as “Boy,” passed away...

Send flowers to the Garcia family.