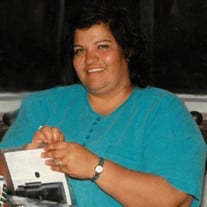 Fidela Montoya, 73, passed away on Monday, May 16, 2022, at her home in Arabela, New Mexico. Please take a moment and share a kind thought or memory with Fidela’s family at www.andersonbethany.com Fidela was born in Morence, Arizona on March 31, 1949, to Manuel and Dalila Archuleta. She attended Duncan High School, where she graduated. Fidela then attended Cosmetology School in Safford, Arizona. In 1969, Fidela married Fernando Montoya of Arabela, New Mexico. As a result of their happy union, she and her husband welcomed their only son, Tito, a year later. Fidela worked for thirty years at Hondo Valley Public Schools, teaching and supporting the valley’s students. Both the students and co-workers loved Fidela. She faithfully served the Arabela community for twenty-three years, volunteering at the Arabela Fire Department. Following Fidela’s retirement, she moved back to the ranch in Arabela. She enjoyed talking on the phone with her son, grandchildren, and nieces and nephews. Fidela will be greatly missed by her family and many friends. Surviving to cherish Fidela’s memory are her husband, Fernando Montoya; son, Tito Montoya; three grandchildren: Tonee Katina Montoya, Tito Nathaniel Montoya, and Dylan James Montoya; and numerous nieces and nephews. Fidela is preceded in death by her parents: Manuel and Dalila Archuleta; as well as her six siblings, four sisters: Flora Herrera, Maxi Archuleta, Priscilla Archuleta, and Sally Martinez; and her two brothers: Manuel Archuleta and Santiago Archuleta. A Rosary will be held on Friday, May 27, 2022, at 1:30 PM, followed by a Memorial Service at 2:00 PM at Anderson Bethany Funeral Home. There will be no Graveside services at this time. Fidela’s tribute was written in her honor by her family.

Fidela Montoya, 73, passed away on Monday, May 16, 2022, at her home in Arabela, New Mexico. Please take a moment and share a kind thought or memory with Fidela&#8217;s family at www.andersonbethany.com Fidela was born in Morence, Arizona on... View Obituary & Service Information

The family of Fidela Montoya created this Life Tributes page to make it easy to share your memories.

Send flowers to the Montoya family.