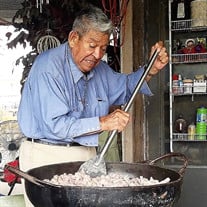 Francisco S. Huerta of Artesia, NM passed away on October 24, 2021 at the age of 95. Services will be held at 1p.m. October 28, 2021 at the Our Lady of Grace Catholic church. Burial will be at Woodbine Cemetary and Comida will immediately follow at the Best Western Pecos Inn in Artesia from 4-6 p.m. Born in Terlingua, TX on September 12, 1926, Francisco migrated to New Mexico in 1934 at the age of 8 where he met and married his one true love Feliciana (Chana) Garcia. Married in August 12, 1945 at Our Lady of Grace Catholic Perish, by Father Stephen Bono, Francisco faithfully served them both until his rebirth. Francisco worked always because he loved helping everyone who approached him with any kind of project. His favorite hobbies were fishing and hunting with his son Jesse and his grand kids. Very active as a child, early memories, as told by his only living sibling, are of “Francisco coming home full of dirt with a pocket full of marbles.” By trade, Francisco (a.k.a Kico, a.k.a Don Pancho) was an Iron worker, welder, mechanic, and carpenter. His work can be still be seen to this day around town along the fence lines of the community, and the mastery of his craft is still used to bale the hay of our farms by workers and citizens who lovingly referred to Francisco as “the miracle worker.” Serving the Catholic church for more than 60 years, Francisco loved to give out coins that were a reflection of his Christian soul, “Golden,” and anyone who came into contact with him was instantly blessed as Frank was a kind, respectful, honest, talented, generous and peaceful man. For those who were lucky enough to have been blessed by his beautiful humor...Són my business que leemports. Loving Husband, Father, Grandfather, Friend and servant of God, Francisco was preceded in rebirth by his parents Filomena and Francisco Huerta, his daughter Margarita Huerta, and his Reina Feliciana Huerta. Francisco was survived by his sister Nicolasa Salmon Huerta, his children Josefa Genoveva Thorson, Jesus & Susan Maxine Huerta, Louis and Rosie Garcia, Katarina Muniz, a plethora of neices nephews, grandchildren, great-grandchildren, great-great grandchildren, and the entire Catholic community. Pallbearers will be Francisco Salinas, Jose Salinas, Arturo Salinas Jr., Daniel Salinas, Steven Huerta, and Chilo Orquiz. Honorary Pallbearers include: Louis Gsrcia, Ramon Rodriguez, Manuel Gonzales, Jayce Salinas Matthew Salinas, Angel Salinas, Noah Joaquin Salinas, Ariella Salinas, Tyler Smith, Derek Little, Garren Smith, Cody Bricker, Hector Orosco, and Ben Orosco. We love you Dad/Pampos! Please take a moment and share a kind thought or memory with Francisco’s family at www.andersonbethany.com. Francisco’s tribute was written in his honor by his family.

Francisco S. Huerta of Artesia, NM passed away on October 24, 2021 at the age of 95. Services will be held at 1p.m. October 28, 2021 at the Our Lady of Grace Catholic church. Burial will be at Woodbine Cemetary and Comida will immediately follow... View Obituary & Service Information

The family of Francisco Salmon Huerta created this Life Tributes page to make it easy to share your memories.

Francisco S. Huerta of Artesia, NM passed away on October 24,...