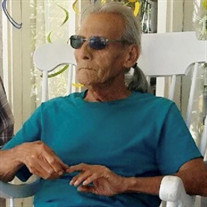 Frank N. Sanchez, 75, of Roswell, NM, Passed away July 25th, 2021 in Roswell, NM. Please take a moment and share a fond memory or kind expression of sympathy for Frank’s family at www.andersonbethany.com. Memorial Services will be held at 10:00 a.m. on August 4th, 2021 at Anderson Bethany Funeral Home, followed by the interment of ashes for Frank, Amparo, and Frank A. Sanchez at South Park Cemetery. Frank N. Sanchez was born in Carlsbad, N.M. to Bonifacio F. Sanchez and Marcilina Navarrete Sanchez on January 23rd, 1946. Frank married Amparo Leaton Sanchez on September 25th, 1965 in Artesia, N.M. Frank worked in the Sanitation Department for the City of Roswell where he retired after 25 years. Frank is preceded in death by his wife Amparo Sanchez and his only son Frank A. Sanchez. Parents, Bonifacio and Marcilina Sanchez. In laws, Nasario and Maria Leaton. Brothers: Juan Sanchez, Bonifacio (Coceno) Sanchez, and Antonio Sanchez. Sisters: Lydia Ortega, Lola Hernandez, and Albesa Sanchez. As well as his brother in law Soccoro Hernandez. Frank is survived by his only daughter Brenda Sanchez-Soto and husband Ray Soto. Brothers: Santos Sanchez, Raymond Sanchez, Jose Sanchez, Manuel Sanchez and Sammy Sanchez. Grandchildren: Adriana Sanchez, Alisa Soto and boyfriend Joseph Vale, Antoni Soto and A.J. Soto. Great grandchildren, Neveah Suarez, Daniella Suarez, D.J. Suarez, Jayden Tarango, Marco Ceballos, Nicco Sanchez, Jose Escamilla, Brody Soto and Frankie Soto. Frank is also survived by companion and partner in crime, Ginger. Frank was a very loving and caring husband, Dad and Papo. Family always came first to him. You could count on him for everything. He always wanted to make people laugh. He cherished his family and friends so much. People just loved to be around him. You would never see Frank without his sunglasses, even in the dark. Frank had many hobbies including: Working on his vehicles, tending to his yard, cooking, collecting antiques, and making his unique bottle lamps. He was most known for singing and playing his guitar. He never turned down the opportunity to sing for anyone that asked, especially his wife who was his biggest fan. The family would like to extend our gratitude to his mailman and friend Joel Juarez, neighbor Lydia Castillo and John Barrera, his great niece Priscilla Aragon, his niece Marina Chavez Mahan, friend Raymond, good friend Maria, and many others who continuously looked after him when his wife and son passed away. Thank you. Frank’s tribute was written in his honor by his family.

Frank N. Sanchez, 75, of Roswell, NM, Passed away July 25th, 2021 in Roswell, NM. Please take a moment and share a fond memory or kind expression of sympathy for Frank&#8217;s family at www.andersonbethany.com. Memorial Services will be... View Obituary & Service Information

The family of Frank N. Sanchez created this Life Tributes page to make it easy to share your memories.

Send flowers to the Sanchez family.