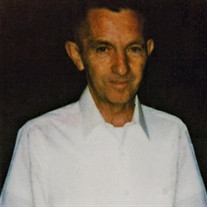 Fred Segundino Garcia April 24, 1934 – March 12, 2021 Fred S. Garcia passed away on Thursday, March 12, 2021, in the family home. Funeral Services will be held at South Park Cemetery on Thursday, March 18, 2021 at 10:00 A.M. Fred was born on April 24, 1934 to Edward Garcia and Delphina Salas Garcia in Model, Colorado. He lived in Colorado until 1952 when he enlisted in the United States Marine Corp. He served and fought in the Korean War and returned back to the United States in 1955 and continued to be active with the military until 1962. He married MaryAnn Cordova of Rainsville, New Mexico on September 12, 1957 and they had 3 children, Darrell Garcia, Robert Garcia and Adam Garcia. Fred and MaryAnn lived in Pueblo Colorado until 1962. They decided to relocate and make a forever home in Roswell, New Mexico where they lived until their passing. Fred worked in the Construction/Carpenter business until 1982 when he joined the TMC Bus Manu factor Company and later on moved on to work with Nova Bus Company until they closed the business in 2004. After his employment with Nova Bus, he decided he needed to dedicate more of his time to his family and retire from the workforce. Fred was a hard worker, in his leisure time he enjoyed watching wrestling and drinking beer. Anyone who knew him knew that he loved his remote control to the TV, drinking beer and eating cookies at any time to the day. His laughter was contagious and he had a great sense of humor and always had people laughing around him. He never met a stranger and knew just about everyone in the neighborhood around him. He loved spending time with his family and looked forward to his grandkids visits. He was always ready to share his cookies with the grandkids when they came over. Fred was a simple man; he asked for little to nothing and enjoyed a great story to share. He enjoyed reminiscing about the good ole days where there was great Spanish music and dancing with his wife Maryann and the time he spent with family and friends. He was always ready to ask you about your day, ready to discuss the news and all the issues happening around the world. He especially loved to talk about El Chapo and all his millions of dollars. He loved old movies and eating at Martin’s Restaurant. The waitress knew him by name and already knew his order. He leaves behind many friendships that he made along the way in life. Those left to cherish Fred’s memory are his children: Darrell Garcia of Cheyenne, Wyoming, Robert Garcia, of Roswell and Adam Garcia and his partner Janet Gomez of Roswell, NM. He leaves behind 6 grandchildren, and 12 great-grand children to carry his legacy. Those preceding Fred in death were his parents Edward and Delphina Garcia, his wife Maryann Cordova Garcia, his siblings: Josephine, Eddie, Mary, Arthur, Sadie, Raffie and Armando. The family would like to take the time to thank the nurses and staff from Encompass Home Health and Hospice for the great care they gave our Dad during his time of need. They would also like to thank all the friends and family that has come by and or called to pay their respects.

The family of Fred S. Garcia created this Life Tributes page to make it easy to share your memories.

Send flowers to the Garcia family.