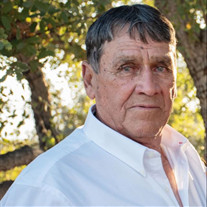 Freddy Roy Herrera, 71, of Glencoe, New Mexico, passed away on Thursday, September 30, 2021, at Presbyterian Hospital in Albuquerque, New Mexico. October 7, 1949, Freddy was born to Frutoso and Amelia Herrera in Ruidoso, New Mexico. He graduated from Hondo High School in 1969 with many outstanding accomplishments and honors. He was captain of the basketball team for four years, on the track team for three years, and was crowned Fiesta King in 1969. Freddy was an honorable member of the FFA, Student Council, and H Club. Freddy was survived by his children: Freddy ‘Lil Fred’, Amber, Brandi, Amelia’ P.Boo,’ Savannah, and Tawny. He had fourteen grandchildren and seven great-grandchildren. His siblings were Frutoso, Fermin, Ervin, Andrew, and Emileen. Freddy had many nieces and nephews who he cared for and loved like his own children. Freddy worked for Armstrong Construction in Roswell for over thirty years. He was most cherished for his devotion to family. Freddy loved his only son dearly and nurtured all of his girls deeply. He loved his whole family very much and would’ve done anything to protect each and every one of them. Freddy had a lifelong love for basketball and playing in the Gus Macker. Freddy liked to spend all his free time at the horse racetrack alongside his brother Ervin and loved to bet the horses. He enjoyed golfing and playing cornhole with his kids. He will be deeply missed in loving memory, for his strong will and HUGE heart. He will be laid to rest beside his mother, father, and late daughter, Genevieve Herrera. On Friday, October 8, 2021, services will be held at 11:00 AM, at St. Eleanor Catholic Church located at 140 Junction Rd., in Ruidoso. Freddy will be laid to rest at San Ysidro Mission Church in Glencoe, off highway 70, immediately following the church service. Family and friends will gather immediately following the burial, at the Ruidoso Community Center at 501 Sudderth Dr., Ruidoso. Flowers are being ordered and provided by Blossoms Floral Design and Artistry at 240 Sudderth Dr., Ruidoso. Please take a moment and share a kind thought or memory with Freddy’s family at www.andersonbethany.com. Freddy’s tribute was written in his honor by his loving family.

The family of Freddy Roy Herrera created this Life Tributes page to make it easy to share your memories.

Freddy Roy Herrera, 71, of Glencoe, New Mexico, passed away on...

Send flowers to the Herrera family.