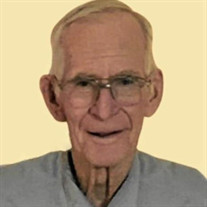 George Leland “Lee" Straley, Jr. passed into eternal life on March 14, 2021. Please take a moment to share a kind thought or memory with Lee’s family at www.andersonbethany.com. Lee was born on February 26, 1935, to Katie Mae Patrick and George Leland Straley, Sr. Lee grew up on the family ranch in Ancho, New Mexico where he went to school thru 8th grade. Lee went to high school in Carrizozo, New Mexico where he met the love of his life, Dorothy Moore. They dated through high school and married on September 19, 1954. Lee served in the army and was fortunate to be stationed close to home at the Stallion Sight New Mexico military base. After his service in the army, Lee returned to help run the family ranch with his father George and Uncle, Charles Sprugeon "Todgie" Straley. Lee was always searching for the newest methods and practices for running the ranch and was involved with the Soil Conservation Service, New Mexico Cattle Growers Association, American Simmental Association, and the Quarter Horse Association. Even serving on several boards for these organizations. Lee and Dorothy raised three children; LeAnne, G.L., and Phil on the ranch. Being so far from the nearest school meant that the family did many things together. As a result, Lee was an active supporter for the Future Farmers of America (FFA), Rainbow for Girls, and attended all the sporting events and activities for all of his children. Lee was also a member of the Masonic Lodge and Scottish Rites. Lee was elected as a Lincoln County Commissioners in 1974 and served through 1977. He was a director for the Carrizozo branch of Citizens State Bank, a BSI bank. And later, became a loan officer and bank manager for the Estancia branch. He also worked as a loan officer for The Production Credit Association of New Mexico in their Albuquerque office. Lee and Dorothy were founding members of the Ancho Community United Presbyterian church. They were both very active in the church having served at the local, Presbytery, Synod and National level. They were very devout in their faith and shared that with those they were around. Lee was an active member of the Roswell Westminster Presbyterian church at his death. Lee and Dorothy liked to dance. Particularly square dance. They would travel all around the state and even went to Aruba with a group to dance. They were active members of the Enchanted Square dance club in Roswell and served as officers of the New Mexico State Square Dance Association for many years. Lee was preceded in death by his wife, Dorothy, his parents George and Katie Mae, his brother Harry, and his granddaughter Katharine. He is survived by his children; LeAnne Byrd and her husband David; G.L. Straley and his wife Brenda; and son Phil Straley. His grandchildren; Misty Straley, George Straley, Kristin House, Kent Straley, Dwight Byrd, Kylen Straley, McKenzie Straley, and Matthew Straley. His great grandchildren: Dylan Straley, Caden Straley, Brooklynn Straley, Karson Straley, Eleanor House, Mason Straley, Annabelle House, John Byrd, and Brie Byrd. The family would like to thank the staff at Avamere of Roswell for the love and care they provided Lee during the past three years. A private family memorial service will be held. In lieu of flowers, the family requests donations can be made to Westminster Presbyterian Church, 2801 West 4th, Street Roswell, New Mexico 88201. George’s tribute was written in his honor by his family.

The family of George Leland "Lee" Straley Jr. created this Life Tributes page to make it easy to share your memories.

Send flowers to the Straley family.