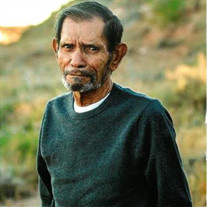 Our beloved Father, Grandpa, Great Grandpa, and Friend, Gilbert Z. Trujillo was called home on July 23, 2021, with his loved ones beside him. A lifelong resident of Roswell, Gilbert was born January 22, 1942, to Pete and Juanita Trujillo. Gilbert graduated from Roswell High School in 1960 and married the love of his life Mary Helen Trujillo on June 30, 1962, she was his soulmate at the age of 13. The two were married for 43 years. He then received an associate degree from Eastern New Mexico University in Electronic Technology. As a young father, Gilbert played and coached men’s baseball for St. John’s Catholic Church where he attended school as a young child. Gilbert along with a few others helped start the Roswell girls’ softball in 1970. And from 1974 to 1985 Gilbert was an active board member and coach for the Roswell Girls Softball Association. He also coached girls’ softball for 13 years. Gilbert was an active board member for the Knights of Columbus. For several years he worked with Southeastern Cash Register before opening his own business “Gils Register and Repair” and then went into retirement. After retirement he loved to drive, so he picked up a part-time job with Desert Sun/Richland Auto. Gilbert went above and beyond for his grandchildren and great grandchildren. He never missed a game for any of them. He was their biggest fan and their number one supporter. Gilbert was the greatest father figure to his great grandchildren Kylea and Kyle Williams. He enjoyed going on long walks, pecan picking, rock collecting, fishing, watching sports (he was a Washington Redskins fan), game shows, Law N Order, and going to the Inn of the Mountain Gods! Gilbert is preceded in death by his loving wife Mary Helen Trujillo; son, Orlando Trujillo; parents: Pete and Juanita Trujillo; brother, Joey Romero; sister-in-law, Linda Miranda; and brothers-in-law: Joe Lucero and Raymond Orona. Those left to carry on Gilbert’s legacy are his daughter, Veronica Williams; granddaughter, Acacia Williams; grandsons: Brandon Williams (Brittany) and Josh Williams; great-grandchildren: Kylea (Mi Reina), Kyle (Wedito) Zack, Alysandra (Buggy), Zayden, Titus, Zariah, and Tobias Williams; sisters: Doris Lucero and Mary (Terri) Trujillo; sister-in-law, Gloria Orona; brother-in-law, Manual Montoya (Janie); and numerous nieces and nephews. Extended family and partner, Jo Ann Archuleta; extended children: Amy Archuleta and Chris Archuleta (Betty); extended grandchildren: Alexis, Jose, Christopher, Lucas Botello, Kendra Abel, David, Sarah, Krystin and Julie Archuleta; and extended great-granddaughter, Myriah Archuleta. A rosary will be recited by Mr. Pablo Martinez, followed by a memorial mass on Thursday, August 12, 2021at 11:00am at St. Peter’s Catholic Church with Father Charlie officiating. A special thanks to Kindred Hospice and Takiesha Fauntleroy for taking such great care of our father and grandfather. Please take a moment and share a kind thought or memory with Gilbert’s family at www.andersonbethany.com. Gilbert’s tribute was written in his honor by his family. God saw him getting tired, And a cure was not to be So he put his arms around him And whispered, “Come to me.“ With cheerful eyes We watched him suffer, and Saw him slowly fade away. Although we loved him dearly, We could not make him stay. A golden heart stopped beating, Hard-working hands put to rest, God broke our hearts To prove to us, He only takes the best. We love and miss you so much Papa!

Our beloved Father, Grandpa, Great Grandpa, and Friend, Gilbert Z. Trujillo was called home on July 23, 2021, with his loved ones beside him. A lifelong resident of Roswell, Gilbert was born January 22, 1942, to Pete and Juanita Trujillo. Gilbert... View Obituary & Service Information

The family of Gilbert Z. Trujillo created this Life Tributes page to make it easy to share your memories.