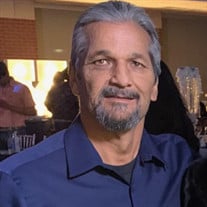 Henry Chacon, 59 passed away on Monday, January 18, 2021 in his hometown Roswell, NM. There will be a Viewing for Henry at Anderson Bethany Funeral Home on Thursday, January 28, 2021, from 12:00 PM to 5:00 PM. A Rosary will be recited at St. Peter's Catholic Church on Friday, January 29, 2021, at 9:30 AM, followed by a Mass at 10:00 AM. Interment will follow at South Park Cemetery. Henry was born to Genobebo Chacon and Elfida Albarez in Roswell, NM on September 23rd, 1961. He graduated from Roswell High School in 1981. Henry started to work for Wackers which moved him to surrounding areas which led him to meet the love of his life. Henry and Rosa Linda were married in Crane, TX on June 23, 1984 and had two beautiful daughters. In 1991 they moved back to Roswell where he worked for American National then to car sales which is now known as Richland for many many years. Staying busy with his family was his absolute favorite. Making every dance recital and every game he could. Henry loved his music whether he was strumming his guitar and singing or just singing along to all his favorites. He was blessed with five wonderful grandchildren. He was their biggest fan. He loved to be on the sidelines yelling and cheering on his boys in every sport they played. He was so proud! Ask anyone, I bet he’s even showed them a video or two. He had one beautiful granddaughter who he spoiled rotten! There he was again at every dance recital or sitting on the couch watching every cartwheel or dance she performed right in our living room. Henry was also very spoiled though; homemade cooking was an all-time favorite for him. He also enjoyed cooking, trying new things on the grill, his griddle, and his smoker. Most Sundays you could find him on the couch in front of the TV cheering on his Steelers. Let’s go Steelers!! Oh how Henry loved to ride his motorcycle. Taking rides to and from work or just taking a ride here and there whenever he could. He was such an awesome man, funny, kind, loving, and very strong! Those left to cherish his memory is the love of his life Rosa Linda Chacon, his daughters Bianca Gonzales and her husband Raymond III, Gabriella Castro and her husband Danny Jr. Grandchildren, Raymond Gonzales IV, Danny Castro III, Richard Gonzales, Aizlynn Castro, and Jordan Castro. Sisters, Sylvia Gonzales and her husband Roy Sr., Barbara Rodriguez and her husband Chris. Brothers, Daniel Chacon and his wife Deborah, Genobebo Chacon Jr. and his wife Clara, and Franklin Chacon; and numerous nieces and nephews. Preceding him in death is his father Genobebo Chacon and mother Elfida Albarez; Brother Samuel Chacon; Sister Celia Chacon. Pallbearers are Daniel Chacon, Genobebo Chacon, Josue Rodriguez, Raymond Gonzales III, Danny Castro Jr., and Raymond Gonzales IV. Honorary Pallbearers are Roy Gonzales Sr., Chris Rodriguez, and Uncle Raul Alvarez. Please take a moment and share a kind thought or memory with Henry’s family at www.andersonbethany.com. Henry’s tribute was written in his honor by his family.

The family of Henry Chacon created this Life Tributes page to make it easy to share your memories.

Send flowers to the Chacon family.