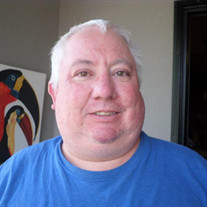 It is with great sadness and a most heavy heart that I share, my son Ian Matthew Glahn, age 53 died on Monday, February 8th 2021 at his home in Roswell NM. It is often said that the hardest thing in life is being a parent who loses a child. Age doesn’t matter, your child will always be your child. He lived life exactly as he wanted to the very end. Ian was born on December 7th, 1967 in Hayward, California. He graduated in 1986 from East Union High School in Manteca, California. In 1991 he moved to Roswell to be close to me and far from the bad path he felt he was going down. He was hired by Leprino Foods in 1995. I asked him if he knew how do the job he was hired for because it didn’t seem like he had the skills. That didn’t worry him, he would just ask a co-worker how they do a task and then pretend that he used to do it a different way and he liked their way better! It must have worked because he received his 25 year award in 2020. Over the years he gave his all to work. He rarely took days off and because he was single, he would offer to work holidays so someone with a family could stay home. For many years he participated in the Chile-Cheese festival by creating displays and leading tours of his division. As a Maintenance Supervisor he knew every inch of the Leprino plant and nearly every employee. I don’t think his co-workers knew how important they were to him and it was comforting to learn how important he was to them from his friend and Manager Sean Nicholson and his very best longtime co-workers Joe Luiz and Michelle Bush. Leprino was wonderful to him. He was a “Foodie” in every sense of the word. He enjoyed cooking and baking and would often take his creations to work to share. He won several ribbons at the fair for dried fruit, bread, cakes and cookies. Every holiday was an excuse to fill the table with all sorts of food even though it was always just 3 of us partaking. We always knew no matter what, that with Ian next door, we would never go hungry even in a “Zombie apocalypse.” Ian was not social and often so quiet you wondered if he was mad. That was just one of the curious things about Ian, but boy could he laugh! He had a great sense of humor and he would come up with the funniest things and we’d laugh great big belly laughs until we cried. He enjoyed watching TV and he would find the most hilarious videos to show us even if it meant pausing the Super Bowl long enough to share what he found on YouTube. Ian is survived by his Mother Linda Kral and step father Martin Kral of Roswell, NM, his father Paul Glahn of Valley Springs, CA., and his brother Chris and wife Cynthia of Round Rock, TX. Ian is also survived by several aunts, uncles, cousins, nieces and nephews. His cat KK is now our cat (they were “friend-enemies” for many years). He wouldn’t admit it, but he did love his cats over the years. It wasn’t Covid that took his life, most likely he had a massive heart attack. In any case, please take good care of yourselves and those you love. I am so thankful that my very last words to him following the Super Bowl were “I love you! Talk to you later.” We do not know what the future holds or how many days we have left. Always try to make your last words, “I love you”. There will be a memorial celebration of his life at Leprino on Wednesday, February 17th at 4:00pm. Employees and friends are invited, dress warm and please wear your masks. Limited parking in the lot in front near the “Guard-shack”. Leprino is establishing a scholarship in Ian’s name for future students in the trades used at Leprino. Please take a moment and share a kind thought or memory with Ian’s family at www.andersonbethany.com. Ian’s tribute was beautifully written in his honor by his mother.

It is with great sadness and a most heavy heart that I share, my son Ian Matthew Glahn, age 53 died on Monday, February 8th 2021 at his home in Roswell NM. It is often said that the hardest thing in life is being a parent who loses a child.... View Obituary & Service Information

The family of Ian Matthew Glahn created this Life Tributes page to make it easy to share your memories.

It is with great sadness and a most heavy heart that I share,...

Send flowers to the Glahn family.