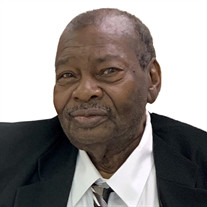 Jack Williams Jr. was born to Mack Williams and Esther McKenzie on December 21, 1938 in Hutto, Texas. He married Deloice Brown on November 1,1960 in Roswell, New Mexico. They shared 5 children and went on to raise 4 of their grandchildren. He spent his life in the kitchen, doing what he loved, cooking. Jack, also known as Chef, began his culinary career in 1955. He became most recognized when he began working as Head Chef at the Roswell Inn, in 1962. Many knew him for his one-of-a-kind cinnamon rolls. He also had a passion for fast cars. As time went on, he took off his chef apron and put on his Papa cap. His days became filled with the love, laughter, and joy of his great-grandchildren. Jack was preceded in death by; his wife Deloice; his father and mother Mack and Esther Williams; his son Jack Williams III; his brothers Ben, George, and Clifton; and his sisters Rosie Lee, Ida Mae, and Zula. He is survived by: his brother Larry; and his sisters Lula (Nancy), Betty Jo, and Melvina; his children Kerry Williams, Jackie Williams Muro and husband Antonio, Jeanice Tolliver and husband Luther, and Jeanette Williams and boyfriend Jose; his grandchildren Antwone Williams and wife Mona, Chalena Raye and husband Adrian, Christopher Williams and fiancé Tamara, Patrishia Williams and boyfriend Steven, Thomas Tolliver, Cavlina Brown, Carrigan Williams and Quade Williams; his great-grandchildren KiAndre, Jadden, Nehemiah, Sean, Jovan, Hazelle, Theresa, Alise, Illiana, Zariah, Ayana, Anaya, Sophia, Samira, Amayah, and Conya. A wake is scheduled for family and friends Sunday, August 8, 4pm - 7pm. Funeral and burial services are scheduled for Monday, August 9, 10am. Both services will be held at Anderson-Bethany Funeral Home. Interment will follow at South Park Cemetery with repast immediately after at the Adult Center. In lieu of flowers, the family welcomes cards. Masks will be required at all services.

Jack Williams Jr. was born to Mack Williams and Esther McKenzie on December 21, 1938 in Hutto, Texas. He married Deloice Brown on November 1,1960 in Roswell, New Mexico. They shared 5 children and went on to raise 4 of their grandchildren. He... View Obituary & Service Information

The family of Jack Williams Jr. created this Life Tributes page to make it easy to share your memories.

Send flowers to the Williams family.