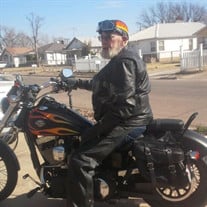 James “Jim” Milton Patton Jr., 72, passed into Jesus’ arms on Saturday, May 28, 2022, in Roswell, NM with his wife and children at his side. Please take a moment to share a kind thought and memory with James’ family at www.andersonbethany.com. As requested by Jim there will be no services. Please remember him as you knew him. On December 16, 1949, James was born to James Milton Patton Sr. and Geneva Alice Carter in Rotam Texas. He attended Roswell High School where he graduated in 1968. He married Margaret “Courtney” Patton on January 28, 1994, in Anson, Texas. They had been married 28 wonderful love filled years. James worked several places in Roswell but retired as lead carpenter at New Mexico Department of Transportation. Those left to eternally cherish and treasure his memory are his wife, Margaret Patton; children: Billy and Shelly Patton, Timothy and Tabitha Patton, Brandy and Doyle Lasiter, Bobby Bolin, Paula and Mike Mitchell; grandchildren: Ashton Patton, Khiera Patton, Timothy Patton, Sharai Patton, Brandon and Rachel Lasiter, Tiffany and Joshua Walker, Coleton and Lexi Bolin, Calista Bolin, Teejay Ansted, and Mashalya Mitchell; eleven great grandchildren; children in his heart that were dear to him: Leitha Bogsby, Debbie Roberts, Shawn and Casey Boggs; sisters: Anita and Jim Mchamey, and Chris Driscoll; his ex-wife Tommie Sue Harwell and husband Ray Bruner; and a very dear friend of many years, Stephen. James is preceded in death by his parents and grandparents, and by twelve fur children who were waiting for him at the rainbow bridge. His family extends sincere thanks to Dr. Virgil Herrin, Dr. Eric Cohen, and RN Janet Sanchez. Janet, you hold a special place in our hearts. Written with love and in his honor by his family.

The family of James Patton created this Life Tributes page to make it easy to share your memories.

Send flowers to the Patton family.