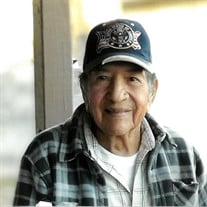 Jesus George Vega, Sr., 88 of Roswell, New Mexico passed away peacefully at home surrounded by his family on October 24, 2021. Please take a moment and share a kind thought or memory with Jesus’ family at www.andersonbethany.com. A rosary will be recited on Saturday, November 6 at 9:30 am at St. Peter’s Church, followed by a mass at 10:00 am recited by Father Charlie Martinez. Interment will follow at General McBride Roswell Veterans Cemetery. Jesse was born on December 6, 1932 in Nogales, Arizona to Jose Pablo Vega and Guadalupe Figueroa Cano. He was the 3rd born child of nine. He attended school in Tucson, Arizona. At the mere age of 13 years old, Jesus enlisted in the Army Air Force, which is now known as the United States Air Force. He retired after 20 years of service as a Tech. Sergeant. While serving our country he was on the 509th Bombardment wing, Strategic Air Command. He received an Air Force Good Conduct Medal with 1 Bronze leaf cluster, an Air Force Longevity Service Award with 4 bronze Oak Leaf Cluster, and a National Defense Service Medal with 1 Bronze Service Star. Following his retirement from the military, he worked for American National Insurance Company then sold cars for Valley Chevrolet, when he decided to pursue a college education. He graduated from Eastern New Mexico University-Portales on December 17, 1976 with a Bachelor of Science Degree. He then went to work for the State of New Mexico-Department of Corrections as a Correctional Officer then promoted to Chief Deputy Warden then choose to work for Sears Roebuck, Co. prior to retiring. Jesse was a lifetime member of the BPO Elks, 969, and the VFW. He also was a member of Fraternal Order of the Eagles, and the American Legion. Jesse is preceded in death by his parents, Jose Pablo Vega and Guadalupe Figueroa Cano, his son Larry Vega, his grandson Jesus George Vega III. His brothers, Frank F. Vega and Jose M. Cano, sisters, Antonia V. Aros, Delores Cano, and Carmen C. Urrutia. He married his “True Love” Alice Alvarez on May 9, 1960 whom he was married to for 61 years and survives him at the family home. He also is survived by his children, Jesus George Vega, Jr. of Tucson, AZ, Sally A. Vega of Roswell, NM, Stephen A. Torres of Las Vegas, NV, Emily Molinar of Roswell, NM, Audriana E. Vega of Albuquerque, NM and Kim Vega of Albuquerque, NM. Along with 15 grandchildren, 26 great grandchildren, 23 great, great grandchildren and 3 great, great grandchildren on the way. He is also survived by his brother, Carlos Vega, of Tampa, FL., sisters Rosemary Cano and Vicky Pesquira, both of Tucson, AZ. Jesse’s favorite pastimes were playing pool, dominoes, reading and doing the daily newspaper crossword puzzle. He looked forward to going to the Elk’s every Wednesday and Friday. But most importantly he thoroughly enjoyed time spent with his family and close friends, to include a very special friendship with Louie and Marian Kuhl of Alamogordo, NM. Life Well Lived A life well lived is a precious gift, of hope and strength and grace, from someone who has made our world a brighter, better place. It’s filled with moments, sweet and sad with smiles and sometimes tears, with friendships formed and good times shared, and laughter through the years. Genuine and infinite love for family and friends, along with memories abound. A life well lived is a legacy, of joy and pride and pleasure, a living, lasting memory our grateful heart’s with treasure. Author unknown Jesus’ tribute was written in his honor by his family.

Jesus George Vega, Sr., 88 of Roswell, New Mexico passed away peacefully at home surrounded by his family on October 24, 2021. Please take a moment and share a kind thought or memory with Jesus&#8217; family at www.andersonbethany.com. A rosary... View Obituary & Service Information

The family of Jesus George Vega Sr. created this Life Tributes page to make it easy to share your memories.

Send flowers to the Vega family.