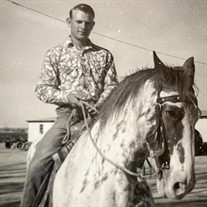 Joe Wayne Scates (78) was escorted home by the angels on Thursday, January 20, 2022 in Roswell, New Mexico. Wayne was born to Joe Frank Scates and Flora Dero Stevens on April 29, 1943 in Dexter, New Mexico. He was one of seven children raised in an agricultural setting and learned how to work hard and enjoy life. There was no kinder, gentler man on the earth, no one who could encourage those around him more than Wayne. He was the sweetest husband to his one and only love, Beatrice Kay Scates, the most patient and loving daddy to his four children, Alesia Freeland, Portia Bundy, Mark Scates and Candy Raines; the most fun grandpa on the planet to Rhonda Scates, Candace Scull, Aaron Leeder, Timothy Bundy, Brittney Branscom, Cody Raines, Sean Scates, Tyler Raines and Jeremy Scates, and the best corny joke-telling great-grandpa to many. Wayne never met a stranger. His unassuming and non-imposing ways were known to all who came across his path. He was a contractor known all throughout SE New Mexico by many as an honest and hard-working business man who always went the extra mile for his clients. His sunny disposition drew people to him and if you visited one of his job sites or passed by his back yard, you would probably overhear him whistling or singing a gospel song, just slightly off key. He never had a harsh word to say about anyone and made peace a priority in his life. There are stories about how much of a scrapper he was in his younger days but he must have gotten all animosity or anger out early in life as the rest of his life was spent loving those around him well. There are also stories about him and his cousin, Dee Hubbard, driving fast cars but most have chalked that up to mere legend and myth as the man never, ever drove even close to the speed limit. Wayne could have been considered an uneducated man by today's standards, but held the unofficial title of genius to anyone he built anything for and loved to figure out how things worked. He never took calculus and was the world's worst at spelling but he encouraged his children to pursue a formal education and was an innate teacher, always explaining the world as he saw it to anyone who would listen. In one of his last days in the hospital, he was still trying to explain to his nurse just how to properly move him from his bed. Wayne's greatest legacy he leaves behind was instilling a love of God in his children and grandchildren. He led by example, bowing his head in prayer at any opportunity, always singing praises and demonstrating the love of Christ in the way he treated others. He taught us to put others first, help anyone in need and put away harsh words. He will truly be missed but never forgotten in the hearts of all who knew him. Wayne was preceded in death by his parents, Joe Frank and Flora, and siblings, Violet (“Booben”) Russell, Lavern (“Coochie”) Tyler, Sylvia (“Sylvie”) Crosby and Johnny Scates. He leaves behind his wife, Bea; four children, Lisa (Leslie), Portia (David), Mark (Jody) and Candy (Paul); nine grandchildren, Rhonda, Candis (Frank), Aaron (Sarah), Timothy, Brittney (Nathan), Cody (Shelby), Sean, Tyler (Stephanie) and Jeremy; many great-grandchildren and great-great-grandchildren; and siblings, Hazel McArthur and Kenneth Scates. Honorary pallbearers will be grandsons Aaron, Tim, Cody, Sean, Tyler and Jeremy. Please take a moment to share a kind thought or memory with Joe’s family at www.andersonbethany.com

Joe Wayne Scates (78) was escorted home by the angels on Thursday, January 20, 2022 in Roswell, New Mexico. Wayne was born to Joe Frank Scates and Flora Dero Stevens on April 29, 1943 in Dexter, New Mexico. He was one of seven children raised... View Obituary & Service Information

The family of Joe Wayne Scates created this Life Tributes page to make it easy to share your memories.

Joe Wayne Scates (78) was escorted home by the angels on Thursday,...

Send flowers to the Scates family.