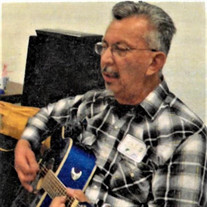 Jose E. Romero passed away on Thursday, March 11, 2021, in the family home. Please take a moment to share a kind thought or memory with Jose’s family at www.andersonbethany.com. There will be a Viewing for Jose at Anderson Bethany Funeral Home on Tuesday, March 16, 2021, 1:00 PM to 6:00 PM, followed by a Rosary. A Funeral Service will be held at Anderson Bethany Funeral Home on Wednesday, March 17, 2021, at 10:00 AM. Jose was born on December 5, 1950, in Santa Rosa, NM, to Andrea Romero. He lived shortly in Santa Rosa, NM, before moving to Lake Arthur, NM, where he grew up with his mother, brothers, aunts, uncles, and cousins. After graduating from Lake Arthur High School, Jose moved to Roswell, NM, where he worked at Pepsi as a Warehouse Loader and then to Coca-Cola as a Foreman. He then met and married Virginia P. Romero, having one child in common. Jose went on to work at TMC Nova Bus, La Casa De Buena Salud and Safe Ride. Jose was a hard worker. In his leisure time, he enjoyed playing musical instruments such as the guitar, the accordion, singing, and anything having to do with music in general. Jose also enjoyed a good game of pool, fishing, camping, and working on cars. Jose was also known for painting signs, sandblasting, tattooing, and even tried his hand at airbrushing once or twice. Those preceding Jose in death were his grandparents: Jose G. Romero and Agueda R. Romero; mother, Andrea Romero; brothers: George Romero, Danny Romero; wife, Virginia P. Romero; uncles: Pablo, Estevan, Eligio, Jorge and Gilberto Romero; aunts: Justina Segura and Ignacia Romero; and many other family members. Those left to cherish Jose’s memory are his only daughter, JoAnn Romero; granddaughters: Gabrielle Barrera and Santana Romero; great-granddaughters: Bianca Arriaga and Carina Arriaga; nephew, Daniel Romero, and family; nieces: Barbara Miranda and family and Agnes Bonham and family; cousins: Jose Segura and family, Jesse Segura, Caroline Campos, Mary Campos, Emily Salazar, Cathy Escobedo, Cecelia, Loraine, George Romero Secundino Gonzales, Celestino Gonzales; as well as many more loved ones. The family would like to give a special “Thank You” to Agnes Bonham for being there every day and in the end. No family is perfect, but the family that tries will always stick together. Also, a special “Thank You” to Christopher Herrera for being there with him and helping during this time and the nurses at Kindred Hospice who helped during this time and making his transition easier for him. Those blessed to serve as Honorary Pallbearers are JoAnn Romero, Gabrielle Barrera, Santana Romero, Agnes Bonham, Daniel Romero, Jose Segura, Joe Segura, John Segura, Rick Segura, and Mick Segura. Jose’s tribute was written in his honor by his family.

Jose E. Romero passed away on Thursday, March 11, 2021, in the family home. Please take a moment to share a kind thought or memory with Jose&#8217;s family at www.andersonbethany.com. There will be a Viewing for Jose at Anderson Bethany Funeral... View Obituary & Service Information

The family of Jose E. Romero created this Life Tributes page to make it easy to share your memories.

Send flowers to the Romero family.