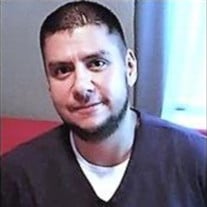 Joshua Barreto, 36, passed away on Saturday, April 9, 2022, in Roswell, New Mexico. Please take a moment and share a kind thought or memory with Joshua’s family at www.andersonbethany.com. A Rosary will be held recited at Anderson Bethany Funeral Home on Friday, April 22, 2022, at 9:30 AM, followed by a Memorial Service at 10:00 AM. On August 7, 1985, Joshua was born to Betty Trujillo Chavez and Jose Luis Barreto in Roswell, New Mexico. Joshua graduated from Roswell High School in 2003, where he participated in football throughout his high school years. Following graduation, Joshua and Aimee welcomed their children, Elythia and Jathan. He continued playing football alongside his brother, JR, for the city’s semi-pro football league with the Roswell Railsplitters and Roswell Invasion. Joshua had a love for the game of football and was a long-time devoted Tampa Bay Buccaneers fan. He proudly distilled that upon his son and daughter. Those left to eternally treasure and cherish memories of Joshua are his children: Elythia and Jathan Barreto; mother, Betty Trujillo Chavez; brother, Eddie Trujillo and wife, Teresa; sister, Michelle Chavez; brother, Jose Barreto JR. and wife, Azaleah; nephews and nieces: Jonathan, Kayla, and Alyssa Trujillo. Brenden and Cosme Campuzano, Caden and Xavien Chavez, Jeriah Jayden, and Victoria Barreto; as well as his great-nephew, Cosmito Campuzano. Joshua is preceded in death by his father, Jose Luis Barreto; grandmother, Cruzita Portillo; brother-in-law, Alejandro Chavez; and his aunt, Ruth Hernandez. Blessed to be chosen as Honorary Pallbearers are his son, Jathan Barreto; brothers: Eddie Trujillo and Jose Barreto, JR; cousin, Jerahmie Aragon, and his long-life friend, Joe Prudencio. Joshua will be greatly missed by all those who knew and loved him. His life legacy will carry on through his beautiful children. His Journey’s Just Begun “Don’t think of him as gone away His journey’s just begun, Life holds so many facets This earth is only one. Just think of him as resting From the sorrows and the tears In a place of warmth and comfort Where there are no days and years. Think of how he must be wishing That we could know today How nothing but our sadness Can really pass away. And think of him as living In the hearts of those he touched… For nothing loved is ever lost And he was loved so much”. -Ellen Brenneman Joshua’s tribute was written in his honor by his family.

Joshua Barreto, 36, passed away on Saturday, April 9, 2022, in Roswell, New Mexico. Please take a moment and share a kind thought or memory with Joshua&#8217;s family at www.andersonbethany.com. A Rosary will be held recited at Anderson Bethany... View Obituary & Service Information

The family of Joshua Barreto created this Life Tributes page to make it easy to share your memories.

Send flowers to the Barreto family.