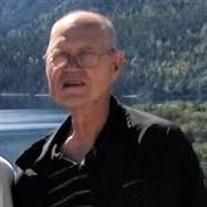 KENNETH RAY BELYEU ROSWELL – Kenneth Ray Belyeu, 76, went home to be with the Lord on Tuesday, June 29, 2021 at his home in Roswell, NM. Ken was born on December 12, 1944, to Wanna Lee (Derrick) and Floyd Randle Belyeu at their rural home on Bogle Farms in Dexter, NM. Ken attended Dexter High School where he participated in team sports and other extra-curricular activities. Following his graduation with the Dexter HS Class of 1963 he and his fellow graduate and lifelong friend, Larry Conklin, joined the US Army Reserve Unit in Roswell. Following their completion of basic training at Fort Polk, LA, they both attended the Army Finance Branch School at Fort Benjamin Harrison, IN. Upon returning to Dexter, Ken worked on Bogle Farms with his dad and several of his Belyeu and Derrick uncles. His knowledge of farm machinery earned him a position in the parts department of International Harvester in Roswell. There he ascended through various service and sales positions, eventually transferring and entering management at the International Dealership in Victoria, TX. Still growing in knowledge and skill, he returned to Roswell as the manager of Estes International. There he earned a reputation for honesty, integrity, reliable service and fair and equitable leadership. He eventually became a partner in the dealership. Ken retired from the dealership in 1994. In 1992, Ken married Fran (Stelzner) Gates. In 1995, after his first retirement, Ken and Fran purchased Southwest Bearing Company on E. McGaffey. Ken combined his stellar personal reputation with his detailed knowledge of machinery to significantly increase the size and scope of Southwest Bearing Co. After expanding that business, Ken and Fran built a storage business from scratch, making storage units available for rent to serve the needs in the community. Following several successful years of running their two businesses, Ken and Fran retired to focus on more personal goals and enjoy whatever leisure pursuits might suit their tastes. Church was a part of Ken’s life and both he and Fran have most recently been active in the Grace Community Church on Mescalero Road in North Roswell. Travel, either with friends or family, or simply as a couple, took them to multiple domestic and international destinations. Whether over the counter at his business or at home, or out in the community, Ken has always been quick to listen to the stories of others and equally quick to share his own experiences with friends, family, customers, and acquaintances in daily life. He is well known, is well liked and will be deeply missed by all who knew him. Ken is survived by his wife, Fran, his two sisters, Shirley and Linda, his sister-in-law, Carolyn, his step daughter, Kimberley Gates, step son, Steve Gates, four grandchildren and three great grandchildren. He is preceded in death by his parents, Floyd and Wanna Lee Belyeu, his brother, Randle Wayne Belyeu, his son, Kevin Ray Belyeu, and his daughter, Kimberly Renee (Belyeu) Villeneuve. A memorial service will be held on Thursday, July 15th, at 11:00 AM at Grace Community Church, 935 W. Mescalero Road, Roswell, NM. In lieu of flowers, memorials may be made to Roswell Community Kitchen, PO Box 3010, Roswell, NM 88202 Please take a moment and share a kind thought or memory with Kenneth’s family at www.andersonbethany.com. Kenneth’s tribute was written in his honor by his family.

The family of Kenneth Ray Belyeu created this Life Tributes page to make it easy to share your memories.

Send flowers to the Belyeu family.