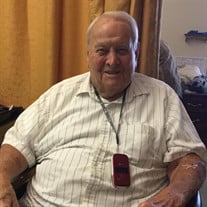 Kenneth “Ken” Marvin Caswell, 95, passed away on Wednesday, March 23, 2022, in Roswell, NM. In honor of Ken’s wishes, no services will be held. On September 22, 1926, Ken was born to Wesley Washington Caswell and Julia Addie (Shelton) Caswell in Sunset, Texas. He attended school in Draw, Texas, and graduated from O’Donnell High School in O’Donnell, Texas. Ken enlisted in the United States Army and proudly served for two years from 1946 to 1949 as an office administrator. Ken was the beloved husband of Billie Harris Caswell, whom he married in December of 1964. They moved from Arlington, Texas, to Roswell, New Mexico, in 1994. Ken and his wife had a cabin in Ruidoso, New Mexico, which they later sold. His wife passed away on October 10, 2013, leaving Ken in the family home. Ken worked for forty-five years in the Aircraft Industry. He also was a self-employed plumber in Arlington, Texas. Ken’s hobbies were doing woodwork and working on clocks. He will be dearly missed by his family and friends. Those left to treasure and cherish memories of Ken are his two stepchildren: Don and Ernet Petty; four step-grandchildren; nephew, John and Lisa Caswell; sister-in-law, Mary Beth Caswell of Grand Prairie, Texas; a longtime friend, Janice Pruitt of Roswell, New Mexico. Ken is preceded in death by his loving wife, Billie Harris Caswell; parents, Wisley Washington Caswell and Julia Addie (Shelton) Caswell; a brother; his niece, Helen Davis; as well as a longtime great friend, Jerry Pruitt. Please take a moment and share a kind thought or memory with Ken’s family at www.andersonbethany.com. Ken’s tribute was written by his longtime good friend, Janice Pruitt.

The family of Kenneth Marvin Caswell created this Life Tributes page to make it easy to share your memories.

Send flowers to the Caswell family.