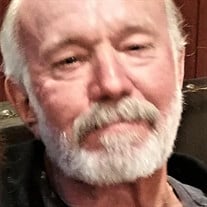 Kirk Douglas Snaith beloved Christian husband and father went home to be with the Lord on Thursday, November 18, 2021. He was 72 years old. Kirk was born in Bedford, Pennsylvania on July 16th, 1949 to Bob and Shirley Snaith. Kirk and his family moved to Santa Fe then Albuquerque, Roswell, and Clovis where Kirk graduated from high school. It was in Clovis, New Mexico as a child, that Kirk met his future wife, Debbie Walker. At the age of 18, Kirk was drafted into the Army and served in Vietnam. Approximately 10 years after returning, Kirk and Debbie’s paths crossed once again in Roswell. Soon they exchanged vows and became one and they now shared the parenting of Kirk’s son Zach and Debbie’s sons Larry Chad and Christopher. Kirk drove a concrete truck for Roswell Ready Mix for 30 years. Kirk enjoyed sports and was an avid Cowboys fan. He also loved playing the guitar. His passion for music led to many a romantic evening out listening and dancing to all kinds of music. Kirk was a tender-hearted soul who loved animals and the beauty of God’s creation. He was a person who was not embarrassed to cry. Kirk leaves behind his beloved wife of 38 years, Debbie, his sons Zach, Larry Chad and his wife Holly, and Christopher, two granddaughters, Jasmine and Stella, whom he adored, also his sister Mary Gay Price and her husband Mike, and many friends. He was preceded in death by his parents, Bob and Shirley Snaith. Services will be held on Thursday, December 2, 2021 at 10:00 am at Calvary Chapel Roswell, 2901 W 4th St, followed by a procession to General Douglas L McBride Veterans Cemetery, Between S Main St and SE Main St (US 285) on E Jaffe St, in Roswell, at the north end of South Park Cemetery, where he will be honored and laid to rest. If you would like, in lieu of flowers, contributions may be made to one of the following: Calvary Chapel Roswell 2901 W 4th St, Roswell, NM 88201 Southwest New Mexico Veteran’s Transportation Network, 2114 West Second Street, Roswell, NM 88201 RHS or GHS Band Boosters, PO Box 4477, Roswell, NM 88202 Please take a moment and share a kind thought or memory with Kirk’s family at www.andersonbethany.com. Kirk’s tribute was written in his honor by his family.

Kirk Douglas Snaith beloved Christian husband and father went home to be with the Lord on Thursday, November 18, 2021. He was 72 years old. Kirk was born in Bedford, Pennsylvania on July 16th, 1949 to Bob and Shirley Snaith. Kirk and his family... View Obituary & Service Information

The family of Kirk Douglas Snaith created this Life Tributes page to make it easy to share your memories.

Send flowers to the Snaith family.