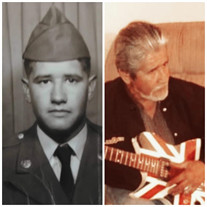 March 9, 1950 – June 22, 2021 Larry Joseph Flores was called home to our Lord from a lifetime battle with agent orange from Vietnam in 1967 as he served the United States Armed Forces (Army).. Larry was born March 9, 1950, in Roswell NM, at ST. Mary’s hospital to his parents George Florez and Connie Florez. Larry was an outstanding athlete who graduated from Goddard High and enlisted in to the United States Military and soon after became an MP K-9 Duty. After Larry left the Armed Forces, he became a loving father to Elario Flores, Amanda Flores, Melissa Flores and Jeremiah Lagestam. His nephew, Jacob Johnson was also like a son to him… and the many dogs he raised as his own children, he loved them all and never stopped training K9's, Larry had a gift. Larry's siblings were Linda Copeland, Tony Florez, Patricia Flores, and Mike Crabtree was always his brother till the end.. Larry was loved by many, friends became family, Larry would give the shirt off his back and made a friend everywhere he went, he had one hell of a personality, he was a real American Badass, leaving us with so many stories and memories. Larry will be greatly missed, and always talked about and his legacy will live on. Services for Larry will be held at Memory Lawn Memorial Park Cemetery on Thursday, July 29, 2021, at 10:00 AM. Please take a moment and share a kind thought or memory with Larry’s family at www.andersonbethany.com. Larry’s tribute was written in his honor by his family.

The family of Larry Joseph Flores created this Life Tributes page to make it easy to share your memories.

Send flowers to the Flores family.