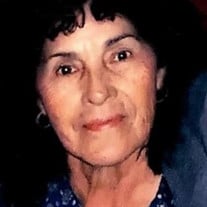 Lawanda Lay November 09, 1931 – October 21, 2021 Our “Chief” went to be with her Heavenly Father, on Thursday, October 21, 2021. She was at her beloved home in Dexter, New Mexico. Please take a moment and share a fond memory or kind expression with Lawanda’s family at www.andersonbethany.com. There will be a Viewing at Anderson Bethany Funeral Home on Monday, October 25, 2021, from 5:00 PM to 8:00 PM. A Funeral Service will be held on Tuesday, October 26, 2021, at 10:00 AM at the family home in Dexter. Everyone is cordially invited to join the family. Lawanda was born in Sand Springs, Oklahoma. November 9, 1931, to Sidney Hendrixson and Annie Hendrixson. The middle of six girls. She was a member of the Eastside Church of Christ in Dexter, New Mexico, and lived a long and happy life. Lawanda went back to school and became a Physical Therapist and worked at the New Mexico Rehabilitation Center of Roswell, St. Mary’s Hospital, and the YMCA. Later, she started working out of her home giving massages to friends. Married her sweetheart on March 31, 1947, he preceded her in death on February 8, 2013. She lived in the East Grand Plains area most of her life. Lawanda was the mother to four children: Nancy Holloway of Tyler Texas, James Jr Lay and wife Kathy of Dexter New Mexico, Gilbert Earl Lay of Roswell New Mexico; one sister Jan Shope and husband Terry of Rockport Texas. Preceding Lawanda in death are her husband, James Lay; son, Connie Gene Lay; son-in-law, Glen Holloway; four sisters; sister-in-law, Earnestine Lawson; grandson, Efrin Fontanez. Lawanda is survived by her grandchildren: Todd Holloway and wife Tonya of Marshall Texas, Daryl Holloway and wife Julie of Terrell Texas, Lisa Brady of Tyler Texas, Jason Lay of Tahlequah Oklahoma, C.J. Lay of Tahlequah Oklahoma, Ryan Lay of Roswell New Mexico, Brianna Lay of Roswell New Mexico, Tessa Fontanez of Dexter New Mexico, Michelle Lopez of Ft. Worth Texas; as well as eight great-grandchildren, four great-great-grandchildren; daughter-in-law, Cindy Lay of Tahlequah, Oklahoma; as well as many nieces and nephews. Lawanda’s tribute was written in her honor by her family.

The family of Lawanda Lay created this Life Tributes page to make it easy to share your memories.

Send flowers to the Lay family.